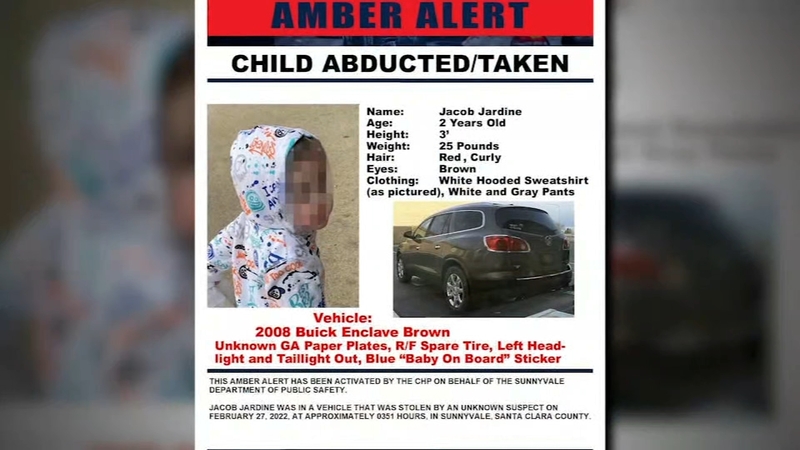 SUNNYVALE, Calif. (KGO) -- The toddler abducted in Sunnyvale early Sunday has been found safe, according to the CHP.

The AMBER Alert has since been deactivated.

Authorities say a Sunnyvale patrol officer conducting a search and found 2-year-old Jacob Jardine located inside the stolen car in a parking lot approximately four miles away. As a precautionary measure, the child has been taken to a local hospital. They say Jacob appears to be unharmed and healthy.

**This AMBER Alert has been deactivated. The child has been located.** https://t.co/Z1kynlN88b

Jacob's grandmother Shawna Thiel cried tears of joy as she spoke live to ABC7 News reporter Cornell Barnard and reacted to news of her grandson being found.

"I want to thank the police department, the CHP, the news, and everybody out there that helped us find this baby. I appreciate every single one of you and I promise that all of you guys will be in my prayers tonight, thank you so much," said Thiel.

Jacob was in the stolen SUV that was taken just before 4 a.m. Sunday outside the Travel Inn in Sunnyvale. His mother Melissa Jardine said she was bringing groceries inside to her hotel room, left Jacob in the vehicle since he was sleeping, and shortly afterwards her SUV was stolen with Jacob in the backseat. Hours before he was found she made a plea for help.

While officers were initially searching for a person of interest seen in this hotel surveillance video, they tell us no arrests have been made.

"Super excited that he was found, can't wait to give him a hug and make sure that he was okay. It's been the worst couple of hours ever," said Jacob's aunt Migdalia Torres.

Investigators haven't said what happened during the 13-14 hours that Jacob was missing. As of late Sunday night, no arrests have been made.