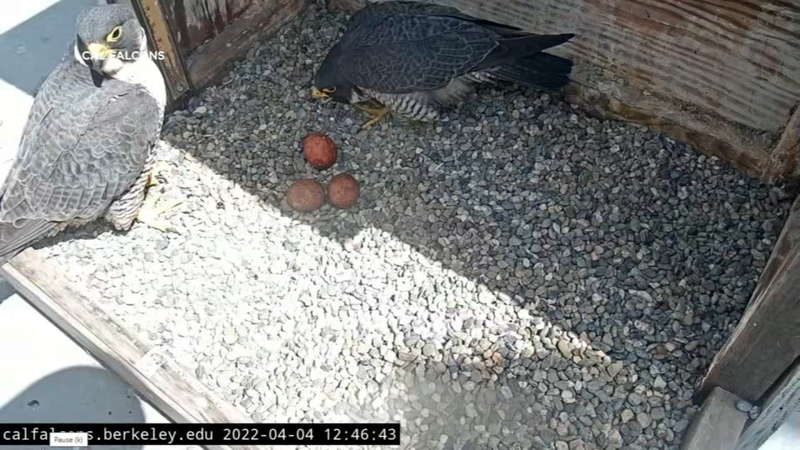 BERKELEY, Calif. (KGO) -- U.C. Berkeley's famous falcon Annie has been more drama than we could ever imagine.

Last week, we found out her longtime mate Grinnell was likely hit and killed by a car.

Annie, the peregrine falcon, was spotted with new male falcon at its UC Berkeley tower just one day after the death of her longtime partner, Grinnell.

But a new male showed up, so now, there is new hope for Annie.

"We think he's been around for a few days or weeks kind of on the outskirts," according to Cal falcons expert and ornithologist Sean Peterson.

Annie has lived with her mate Grinnell on UC Berkeley's Campanile since 2016. She may have flew to see her young on San Francisco's Alcatraz Island.

And already Annie's new admirer has been doing a lot for her, according to Peterson.

"Annie was just I guess enough of a catch where he swooped in there as quickly as he could. And he's bringing her food, sitting on the eggs and then he's been doing everything you would hope the male Falcon would do."

In an ongoing twist, Annie's new boyfriend doesn't have a name yet.

But you, the viewers have control over Annie's and her new boyfriend's life. "Cal Falcons" is holding a contest to have you name him.

Be sure to tune into ABC7 News' new digital streaming show, ABC7@7, weekdays at 7 a.m.

Watch the full interview in our video player above.