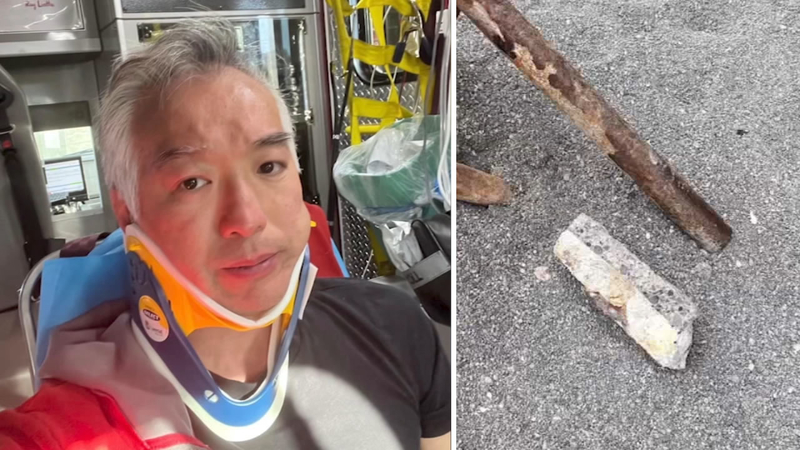 SAN FRANCISCO (KGO) -- A Millbrae city council member is speaking out after becoming the latest victim of a brazen attack in San Francisco.

Anders Fung was with his wife and two teen children, walking near Land's End on Saturday around 5 p.m.

That's when Anders was suddenly hit on the head with this concrete block. He fell to the ground and nearly lost consciousness.

An older San Jose couple is detailing a terrifying home invasion robbery where they were gagged and bound by attackers.

When his daughter chased after the two men to take photos and call 911, they allegedly flashed an obscene gesture at her, and continued to pelt Anders with more heavy objects from about 20 feet above.

Anders suffered a two-inch laceration which required staples and has a herniated disc in his neck.

Anders says more needs to be done to stop these senseless attacks, and not just rallies we saw on the Peninsula and around the country in 2021.

RELATED: Asian Americans least likely to feel like they belong in US, study finds

"I want everyone to understand it's important to speak out so that law enforcement understands it... that our policymakers understand how it impacts our community and how important it is for us to take action to stop these senseless violence and hate... it is important we bring these perps to justice so this doesn't happen again." He continued to encourage others "don't be afraid to speak out and report this to law enforcement."

Anders says he is expected to make a full recovery and is grateful to his kids for acting quickly.

"Seeing them step up my rescue (makes me feel) if anything happens to them in the future they have this sense of responsibility and they'll step up."

U.S. Parks Police responded to the scene Saturday and according to Anders, the suspects have not been apprehended and the investigation is ongoing.

Anders told me rallies of 2021 raised awareness but more needs 2b done. “Policymakers need to understand how [these attacks] impact our community.”

He is proud of his kids for yelling out & coming to his rescue. The attackers also flashed an obscene hand gesture. #SanFrancisco pic.twitter.com/nkG2CCYx8k