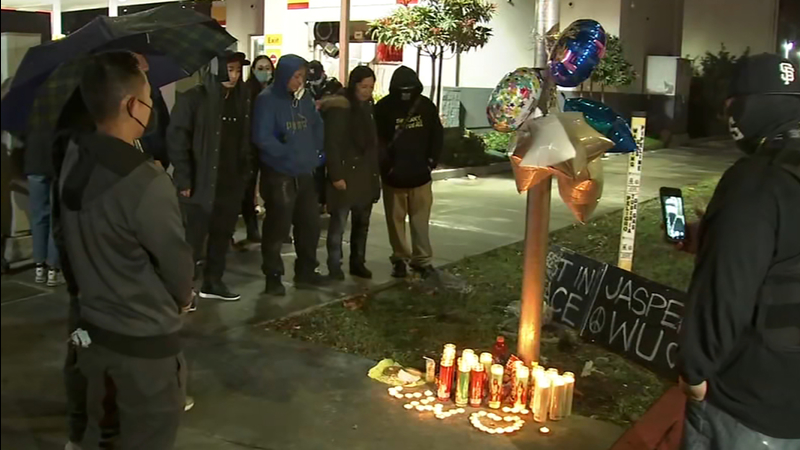 OAKLAND, Calif. (KGO) -- Monday night's rain and the chilly temperatures didn't stop around two dozen people from coming out to remember 23-month-old Jasper Wu who was killed by a stray bullet in Oakland.

A candlelight vigil was held near 7th and Market in Oakland in the shadows of I-880 where young Jasper was hit by that stray bullet.

RELATED: Heartbroken mother of 23-month-old killed on I-880 in Oakland makes plea to public

Anger and sadness Monday night as community members in Oakland remember 23-month-old Jasper Wu. Those here lit candles in memory of the youngster who would have soon turned two.

"Our hearts are torn, our community is torn because of this. It's just senseless, we just don't know what to make of it, we are just totally ripped apart," said community activist Will Lee.

Those attending the vigil are demanding that the shooter or shooters turn themselves in. At least one community member sending a direct message to those individuals who were involved and who are still out there.

RELATED: Fremont family urges suspect to surrender after toddler dies, caught in crossfire of I-880 shooting

"My message is like this, it's wrong what you guys did you're outta pocket for that you know what I'm saying! Leave innocent people alone, facts! Especially babies too, you guys outta pocket," said Jimmy Bounphengsy.

Community members attending the candlelight vigil don't know the Wu family, but say they are heartbroken over what happened, and hopeful that someone comes forward with information or video to help find the shooter.

"And to the Wu family, the Bay Area Asian community is here for you, we're standing strong for you, we're out here and we're going to stand here in strength with you," said Lee.

"We're talking about an innocent child who had done nothing to anybody. This child never hurt anybody in his life. Why does he deserve to die? He does not deserve this," said Louie.