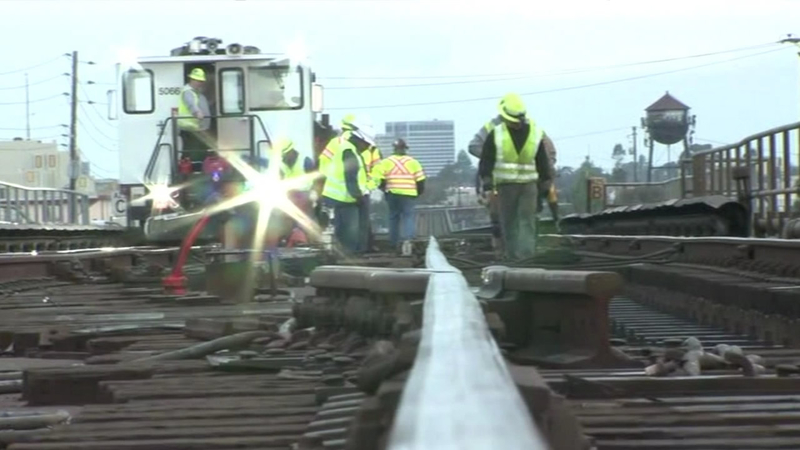 CONCORD, Calif. (KGO) -- BART officials are taking steps to slow down trains at more than three dozens spots because of dangerous track conditions.

One of those spots is in Concord, where an empty train derailed last February.

It's not the trains - they can still go their normal speeds. Officials are slowing them down on purpose because they are worried about the deteriorating tracks, according to a report in the San Francisco Chronicle. Bart trains in Concord are now taking the curve a little bit slower, down to 18 miles per hour instead of 27 miles per hour.

"In an abundance of caution, any interlocking that is that size, we are going to slow trains down. There are about 37 of those interlocking system wide," explained Alicia Trost, a BART spokesperson

A track's normal life span is assumed to be 25 years. BART has been in business for 42 years.

Bart trains are slowing down... And officials say it's for your safety! They're worried about old deteriorating tracks.

As such, BART officials are worried about more derailments. There have been two in five years near the Concord station. They believe issues with the tracks caused the accidents.

Many passengers say they can deal with slower trains. "I'd rather not go off the track. If they have to slow down, that's fine," said one passenger.

Others are not so sure. "I don't feel safe riding on BART. Sometimes you it feels like a roller coaster ride," said one passenger.

They're also slowing down in some spots because of old rails.

"There are three locations right now on the BART system where we are running trains slower because the ties and the rail components need to be replaced," said Trost.

With worn out rails and rotting ties, BART can't ignore its old deteriorating system any longer.

System upgrades are already underway. Crews will be working on the elevated section of track between the Oakland Coliseum and Fruitvale stations on the weekends for the next few months. "That may mean bus bridges or single tracking, which causes delays, so we will plan weekends and low ridership days," said Trost.

According to the Chronicle report, a track tie there was so old, it crumbled when an inspector stepped on it. The Bayfair station will probably be next in line for repair work.

The system needs an overhaul but officials say the tricky part is funding it. They need $4.8 billion for the repairs. BART officials says they will go to the ballot to ask taxpayers to help cover the costs.