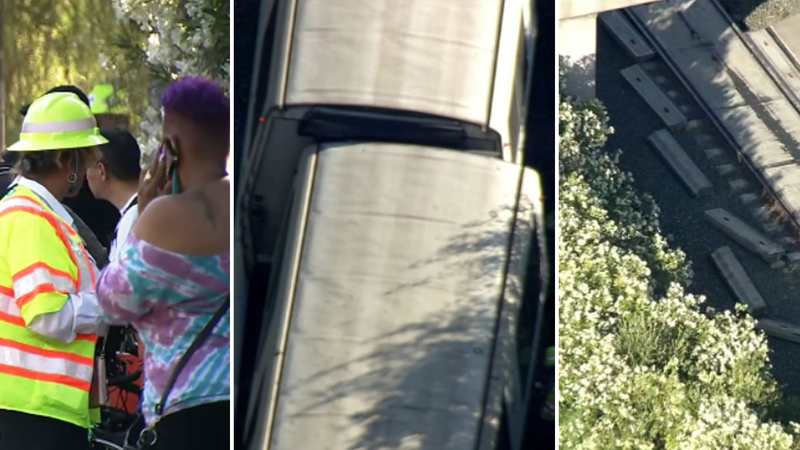 "The train started shaking violently, when it came to a sudden stop. The conductor got out and walked to the back of the train. And then when he was coming forward, he started telling everyone to evacuate," says Rennie Davis, who lives in Bay Point.

Davis was trying to get his kids to their mom so he could get to work in San Francisco. The three of them were sitting in the middle of the train when the back two cars derailed.

In the past, extreme heat has caused BART tracks to move or buckle. The rails can become soft and be damaged by the train's weight.

Trost says heat caused the rail to curve, forcing the last two cars to come off the tracks.

A total of 50 passengers were on the BART train. All were able to evacuate safely evacuate. Several were treated for minor injuries. One passenger was taken to the hospital with back pain.

Some passengers reported seeing smoke or fire. BART officials attribute that to sparks that ignited after the two cars derailed, which caused some small brush fires. Trost says those were quickly put out.

Passengers were able to evacuate through a chain link fence. Ginesta Lee was one of them. She was on her way to Richmond when she felt a jolt.

"I have never felt that before. And I thought maybe it was a tree branch, or something like that. But (the train) keep going. Even though I was scared, I just thought, 'Lord, just get us home!" she says with a laugh.

California Public Utilities Commission, which oversees BART says they are investigating the incident.

Update 9:30pm: The initial assessment is that heat played the main role in the partial derailment by causing a curve in the track.

The plan is to keep the bus bridge between Concord and Pleasant Hill tonight but WE WILL have at minimum single tracking train service tomorrow.

We have a crew of 70 people that will work overnight to move the train then cut out the damaged track and replace it.

We likely will not get that track back in service by 5am but the opposite track is not damaged and trains will run on it.