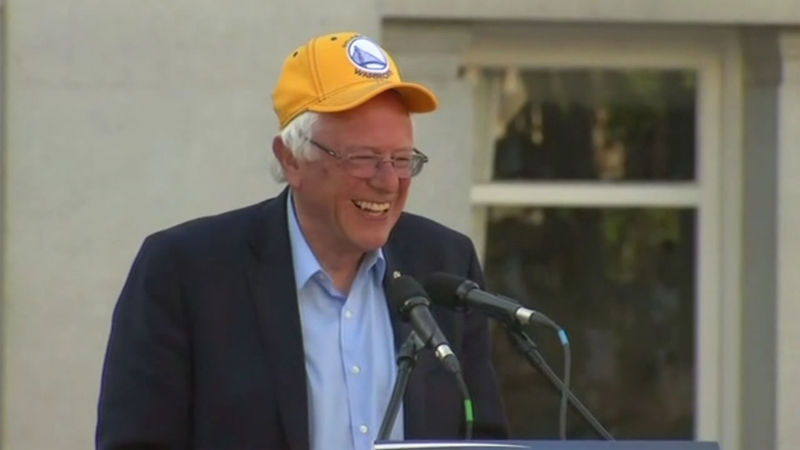 This was the second of two Bernie Sanders events in Oakland on Monday, and this one was moved up to avoid being at the same time as the Warriors game.

During the rally, Sanders touched on his familiar themes - getting big money out of politics, his plan to make public college tuition-free, climate change and universal healthcare.

This is the Bernie-view from behind stage at Frank Ogawa Plaza...crowd packed in for @BernieSanders rally. @Oakland pic.twitter.com/gEFtLECs4k

"If we can win here in California, our largest state, one of our most progressive states, we will go into the Democratic Convention with a great deal of momentum and we will come out with the nomination," he said. "In virtually every state and national poll, we do much better against Trump than does Secretary Clinton."

Halfway through the speech, a group of protesters rushed the state. The Secret Service was on it immediately. ABC7 News was told they were members of an animal rights group that wanted to send a message to the senator.

The math may be against them, but there's no give-up in those here who are feeling the Bern. They're not ready to throw their support behind Hillary Clinton, at least not before the convention.

.@BernieSanders mocking @realDonaldTrump claim that the CA drought is over. pic.twitter.com/SpWKCNTdMf

"I think we'll be in such a deep depression at that point that I won't be thinking clearly anyway. We're just not going there yet because we need to keep our energy here in the moment where it can still help and support Bernie," Sanders supporter Ashlyn Rae said.

The atmosphere was part carnival, part rock concert with some politics mixed.

Sanders supporters started lining up here much earlier in the morning, before the gates opened. The line extended all the way around the downtown area. Oakland police estimate the crowd topped 20,000.

Sanders plans to spend even more time in the Bay Area, his campaign announced, adding to the California swing.

On Tuesday, a press conference on health care is planned for the morning in Emeryville, followed by rallies in Santa Cruz and Monterey.