"The dog bit me, he bit my head." According to the police report, the woman received 11 stitches to the top and back of her head.
KGO
By Melanie Woodrow 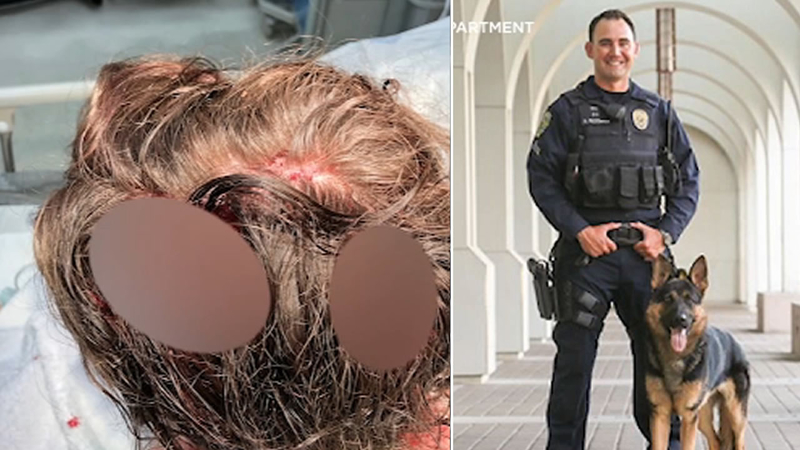 BRENTWOOD, Calif. (KGO) -- A Brentwood Police Department K9 officer that ripped off a woman's scalp had a similar bite incident in 2019, according to a woman in police video obtained by the ABC7 News I-Team.

"If you're in the attic I'm going to get my canine and he's going to bite you," Brentwood Police Officer Ryan Rezentes could be heard saying in his police body-worn camera video on January 30, 2019.

Officer Rezentes was responding to a woman's home.

According to the police report obtained by ABC7 News, a person the woman identified in police body-camera video as her ex-partner called police to report a domestic dispute.

GRAPHIC VIDEO: The ABC7 News I-Team has new details in the case of a Brentwood police canine that ripped the scalp off a woman suspected of shoplifting.

In the report, Officer Rezentes writes, he had been to the residence several times for calls of this nature.

The woman was on active felony and misdemeanor probation according to the report.

When she didn't come out of the attic, after approximately one minute of commands according to the report, Officer Rezentes and canine Marco went in.

"Have it your way," Officer Rezentes can be heard in the video saying.

"Got her, got her, he's on a bite," an officer shouts as the woman can be heard screaming.

In the report, Officer Rezentes writes that he yelled at her to come towards him with Marco. When she did not, he made his way to her. He writes that he could see Marco was biting her hand or hands.

She had blood on her head which he writes he believed was from striking it on a beam or from an exposed nail from the roof.

Once officers got her down from the attic, she told first responders the canine Marco bit her head.

According to the police report, she received 11 stitches to the top and back of her head.

Her hand was also injured.

"Oh my god it's so painful," she can be heard telling first responders in the video.

Gov. Gavin Newsom signed into law several criminal justice reforms Thursday, including a bill that would require police officers across California to intervene if they witness excessive force by a fellow officer.

In a statement, a Brentwood City spokesperson writes, "This incident was reviewed by the Brentwood Police Use of Force Committee which found the deployment of the K-9 to be within policy and law under the circumstances. In this domestic violence incident, the suspect was on parole for a violent felony involving a weapon and was hiding in an attic. It was unknown if she was armed at the time and the confined space of the attic posed a particular risk to officers leading to the deployment of the K-9."

ABC7 News recently reported another woman, Talmika Bates, filed a lawsuit against Officer Rezentes and the City after the same canine Marco ripped her scalp off on February 10, 2020, while she was hiding in bushes.

According to the police report, Bates and two other women stole approximately $10,000 worth of perfume from an Ulta Beauty store. Bates was also a passenger in a getaway car that rammed a police vehicle.

The Brentwood Police Department spokesperson told ABC7 News K-9 Marco has been inactive since April 2021 and is currently in the process of being retired due to age.