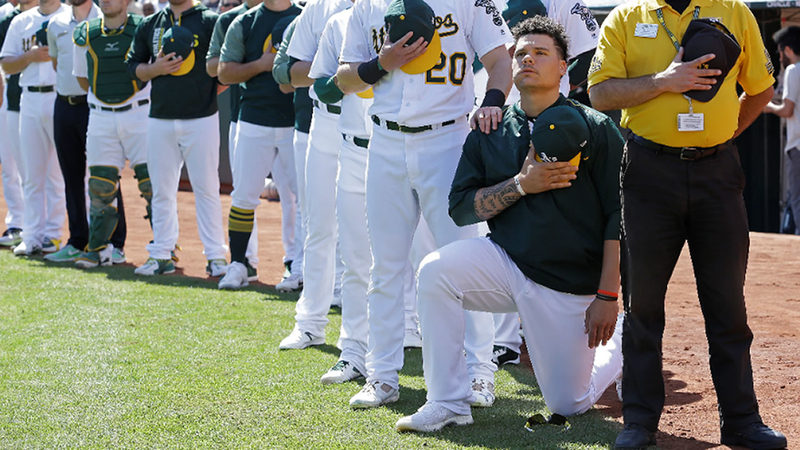 SAN FRANCISCO (KGO) -- Bruce Maxwell's life changed because of one moment, one decision.

The former A's catcher took a knee to protest racism and police brutality in 2017, a decision that still impacts him today.

WATCH ON YOUTUBE: An open conversation with Bruce Maxwell | With Authority

In a deep and meaningful, hour-long conversation, Maxwell opens up about his life and the overwhelming criticism and threats that led him down a path of depression, resulting in an arrest that made headlines.

"My life changed after that moment to be honest with you," he said on the "With Authority" podcast.

He says even now, three years later, he still endures threats and hateful comments for his actions.

"The threats and the comments that I was receiving, even to this day, about that day of kneeling during the national anthem, it's disturbing... I never knew somebody could possess so much hatred."

But he was doing what he believed was right.

"My parents always taught me, 'standing up for what's right might not be easy, but it is the right thing to do,'" he said.

Growing up bi-racial in Alabama, Maxwell details the challenges he faced, and what the tipping point was in his decision to become the first MLB player to take a knee.

He also offers his take on why he believes Drew Brees' recent comments about silent protests in the NFL show a lack of understanding of the social issues his teammates face every day, teammates who helped capitulate Brees' Hall of Fame-level career.

"To make that statement on national television, that's a problem," he said.

As a member of a family with deep military ties, Maxwell is uniquely qualified to explain why silently protesting during the national anthem doesn't dishonor the flag or the troops.

And to "lose his career" over it, he says, is "demoralizing."

Now a reigning champion in Mexico's baseball league, he tells us how he's found happier times, while introducing us to his adorable puppy.