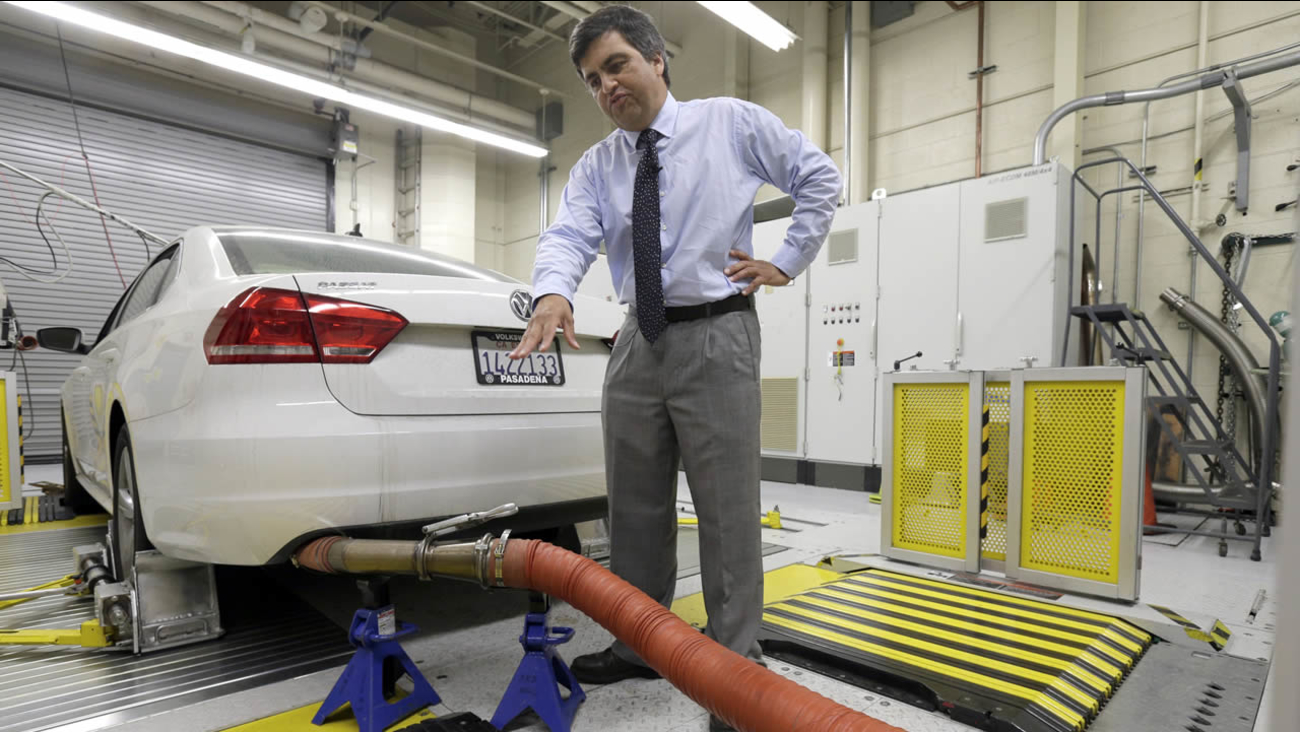 FILE - In this Sept. 30, 2015, photo, John Swanton, with the California Air Resources Board, explains how a Passat is evaluated at the emissions test lab in El Monte, Calif. (AP Photo/Nick Ut,File)

LOS ANGELES -- California regulators on Tuesday rejected Volkswagen's recall plan for some of the German automaker's most popular diesel models that used software to intentionally deceive government emissions tests, including the Beetle, Jetta, Golf and Passat.

The rejection doesn't rule out an eventual recall plan for owners of the 75,688 affected 2.0-liter diesel cars in California.

But it does prolong the limbo for drivers who bought the diesels under the false impression that they were getting a cleaner engine along with a more powerful car and better mileage and who have been waiting for a path forward since the scandal unfolded last September.

The action also leaves the possibility of a buyback for VW owners.

The California Air Resources Board said Volkswagen's plan was unacceptable for a variety of reasons, including that it did not adequately identify the affected vehicles; did not include a sufficient method for obtaining the car owners' names and addresses; and did not include adequate information on how the fix would affect future emissions results.

The state agency also issued a formal notice against the German automaker, alleging its deception and failure to propose a timely solution had violated the state's clean air regulations and "fundamentally undercut" efforts to protect residents from harmful pollutants.

That finding will likely mean future fines for VW as the investigation continues.

The state agency is working to quantify the damage done by the excess nitrous oxide and particulates spewed into the air to help reach a resolution, said David Clegern, an agency spokesman.

The U.S. Environmental Protection Agency, which is also investigating VW, issued a statement saying it agreed with California regulators but was operating on a different timetable.

The rejection only applies to 2.0-liter diesel engines registered in California.

A recall plan for 3.0-liter diesel engines, including some sold under the VW-owned Audi and Porsche brands, is due next month.

In a statement, VW said it was continuing to work with both state and federal regulators and the rejection of its recall plan Tuesday did not mean a recall would not occur.

"Today's announcement addresses the initial recall plans Volkswagen submitted ... in December," the statement read. "Since then, Volkswagen has had constructive discussions with CARB, including last week when we discussed a framework to remediate the (diesel) emissions issue."

The development is not necessarily a major setback for VW, said Karl Brauer, a senior analyst with Kelley Blue Book.

The automaker has been working on a potential fix, but it needed more time - something that California regulators were not willing to give.

"It sounds like they didn't have enough specifics," he said. "I think they had a framework of a plan, and it wasn't enough detail for CARB and EPA to be happy with it."

Those specifics may well be on the table Wednesday when the German automaker's top executive, CEO Matthias Mueller, meets privately with Environmental Protection Agency Administrator Gina McCarthy in Washington, D.C.

Both VW and EPA declined Tuesday to provide any further detail about what the two will discuss, or even what time the meeting will take place. But federal regulators have not shied away in recent days from publicly expressing their frustration with the company.

Asked about the issue at a public appearance last week, McCarthy said EPA has yet to identify "a satisfactory way forward" toward a fix for the owners of VW's diesel cars.

"We are really anxious to find a way for that company to get into compliance, and we're not there yet," McCarthy said.

Last week, the U.S. Justice Department, representing the EPA, filed a civil suit that could potentially expose VW to more than $20 billion in fines under the Clean Air Act. VW could rack up additional civil penalties based on the facts determined at trial. A separate criminal investigation is underway, and numerous private class-action lawsuits filed by VW owners are pending.

VW first admitted in September that the suspect software was installed in about 500,000 cars nationwide with its popular 2.0-liter diesel engines. The company later admitted a similar "defeat device" was also included in about 85,000 diesel vehicles with 3.0-liter engines, including some Audi and Porsche SUVs.