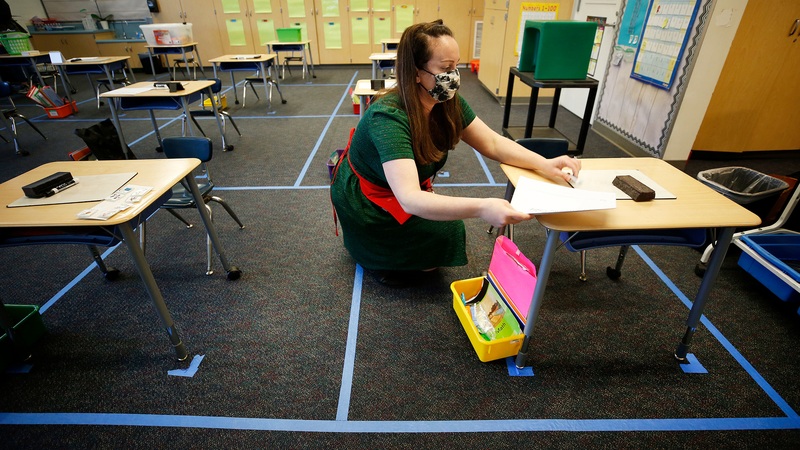 SACRAMENTO, Calif. -- After weeks of tense negotiations, California legislators agreed Thursday on a $6.5 billion proposal aimed at getting students back in classrooms this spring following months of closures because of the pandemic.

Senate Bill 86, known as the "Safe and Open Schools" plan, financially incentivizes California school districts to resume in-person instruction by April 15th. The bill allocates $6.5 billion to school districts - $2 billion will go to help reopen schools and $4 billion is for in-person learning loss. This is in addition to another $6 billion in federal funding.

The new proposal would triple the funding for schools and require county public health departments to offer vaccinations to school staff who return to in-person classes. It also pushes back the timeline for reopening and gives school districts greater freedom in how to spend the funding, which each district would receive based on its student population.

Kate Larsen: "Do you have faith that districts will be able to make that April 15 deadline?

Assm. Phil Ting: "You know, I have more than faith. What I have is, we have incentives."

Ting explained that "If schools don't reopen by April 15, they'll have to start returning that part, you know, that $2 billion."

Ting says SB-86 says that if a district is in the "purple tier", cohorts of vulnerable students must be allowed back in the classroom.

"So foster children, English language learners, homeless children, those folks that are really suffering the most under distance learning," said TIng.

If a district is in a "red tier", all K-6 students must be allowed back, if the district and schools want to keep the money.

"I am so happy. It seems there's a light at the end of the tunnel," said SFUSD teacher and mom, Stephanie Li. "I'm a much better teacher in person, hands down."

Li teaches 3rd grade at Frank McCoppin Elementary in San Francisco. While she's optimistic that SB-86 will be the push districts need to reopen, she's not without frustrations.

"I'm pretty disappointed with how things have been handled," Li said. "I don't know what is taking our district, particularly when we have low numbers, so long."

RELATED: SF files lawsuit against its own school district to force classrooms to reopen

On Thursday night, an SFUSD spokesperson said they need more time to review the bill, but said the district can not reopen schools without infrastructure for staff and student testing, vaccines for teachers, and moving out of the purple tier.

But, San Francisco City Attorney Dennis Herrera, who filed a lawsuit against SFUSD earlier this month, sent a letter Thursday, saying he will challenge the legality of the district's plan, if they don't reopen to vulnerable students in the current purple tier, without waiting for staff to be full vaccinated.

"I would feel safe now going back, but of course ideally I'd be vaccinated," explained Li.

Ting believes K-6 educators can be vaccinated by mid-April. "I believe that this timeline is very implementable."

Regardless of funding, the proposal requires all schools to adopt a COVID-19 safety plan by April 1 that has been approved by labor unions. SFUSD and the City's labor union will vote on an agreement next week.

Getting students back into classrooms has become a pressing political issue for Newsom, who is facing a possible recall election later this year.

Critics of Newsom's original $2 billion reopening plan - including Los Angeles Unified, San Diego, San Francisco and other large school districts across the state - said it set unreachable rules and deadlines that included requirements to reopen as early as mid-February when California's COVID-19 case rates were skyrocketing.

On Thursday night, Newsom, said this about SB 86:

"While the Legislature's proposal represents a step in the right direction, it doesn't go far enough or fast enough. I look forward to building on the growing momentum to get our schools open and continuing discussions with the Legislature...."

The new plan appears to give school districts greater freedom in how to spend reopening money. It would allow schools to extend the instructional school year and increase the school day to catch up on learning lost from nearly a year of online classes. It would also allow schools to spend money on COVID-19 testing and equipment to make classrooms safe.

Voicing his support for the plan, Assemblyman Kevin McCarty, a Democrat from Sacramento, said, "It is our top priority to ensure that California kids can safely return to school soon and doing so will also help reopen our economy."

"Here are two truths - California's students need to get back in the classroom, and there is no easy solution to getting them there in the midst of the pandemic. These bills move us closer, and build on the governor's framework," said state Senate President Pro Tempore Toni Atkins, a Democrat from San Diego. "We all share the same goal - to get students back into school safely."

The Assembly expects to vote on the bill Monday.