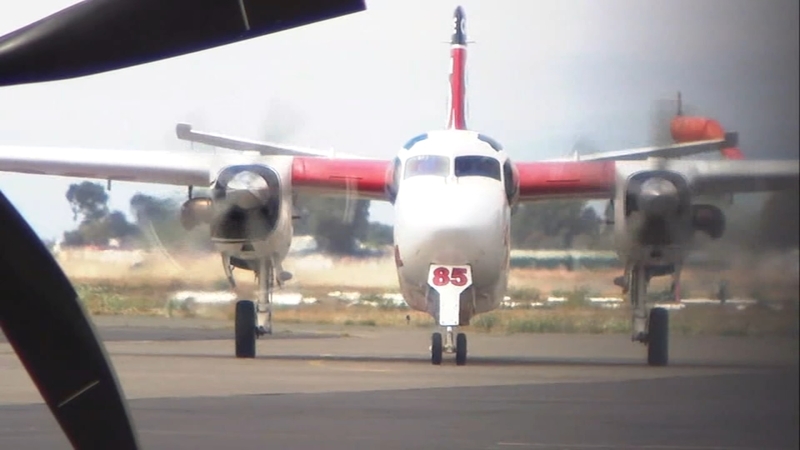 SAN FRANCISCO, Calif. (KGO) -- A jet fuel shortage could ground firefighting aircrafts amid wildfire season. The shortage, coupled with a number of issues brought on by the COVID-19 pandemic, continues to cause problems at airports around the west.

"No one agency can fight fire alone," a reminder from the National Interagency Fire Center (NIFC), addressing the current jet fuel shortage and impacts to future firefights.

While NIFC spokesperson, Jessica Gardetto, said they are not yet panicking, she explained they are preparing.

"It could cause delays in wildland fire suppression resources," Gardetto shared. "That being said, where we have experienced some delays or some fuel shortages, we've been able to mitigate for that. So, it has not significantly affected fire suppression operations. However, we are planning for potential in case we do run low or run out of jet fuel."

Across the state, CAL FIRE said its Air Management Unit (AMU) in Sacramento confirmed this is a problem for commercial airlines.

"However, we have procured fuel and have a solid system to procure fuel for our Jet A aircraft," Chief Jake Hess with CAL FIRE SCU said during a Wildfire Preparedness Townhall on Monday. "So, it's not impacting our operations for CAL FIRE right now."

However, "right now" doesn't consider what could happen if the agency runs out of jet fuel regionally, as the shortage could threaten to keep mutual aid aircraft on empty.

"The concern is if we run out of jet fuel regionally, and we have numerous airports out of jet fuel all at one time," Gardetto told ABC7 News. "That is where the real concern lies. And thankfully at this point, we're not seeing that. We've been able to move aircraft strategically if we see jet fuel running low at certain small airports."

The reason for the color change of the full 'buck' moon is the smoke from the Western wildfires has drifted all the way across the country.

According to Airlines for America (A4A), the trade association for the country's leading passenger and cargo airlines: "A lack of available pipeline space for jet fuel and a shortage of fuel trucks and drivers amid surging demand for air travel and cargo are contributing to low fuel inventories at some airports, primarily smaller ones in the western United States."

"U.S. airlines are working to accommodate that demand while minimizing any potential disruptions to passengers or shippers. Carriers are taking proactive measures such as having aircraft take on extra fuel at non-impacted origin airports in order to supplement the fuel supply at impacted destination airports. We have been and continue to be in communication with federal authorities and pipeline operators to address this jet fuel capacity issue."

"While our operations are running normally, the larger issue is that jet fuel has lost pipeline space to gasoline and diesel over the past year due to the pandemic. The Federal Energy Regulatory Commission, the pipelines, and the airlines need to work together to allow space on the pipelines to ship the needed jet fuel to the airports."

Experts said that with the demand for air travel plummeting 96% at the onset of the pandemic, U.S. passenger carriers put 3,200 aircrafts -- more than half the fleet -- in storage.

Fewer flights required far less jet fuel, which resulted in much lower volumes of jet fuel being shipped through the pipelines, approximately 70% less than normal in the initial months.

Because the amount of fuel a pipeline customer can ship is based on how much fuel the customer shipped in the preceding 12-month period, industry experts said airlines have no way of boosting their fuel shipments.

And beyond the inconvenience to travelers, Gardetto with NIFC said smaller, more rural airports are relied upon to service firefighting aircraft working in remote areas.

"About 85% of all fires are caused by people. So that's one thing we're really asking the public, to be careful with anything that could cause a wildfire right now, knowing we do have jet fuel issues, and the fact that we have other large wildfires burning across the landscape," Gardetto added. "We're really trying to prevent the fires that we can prevent at this point."

She said it's not uncommon for smaller airports or smaller air tanker bases to run out of jet fuel, because they ae without large jet fuel capacity.

Gardetto continued, "It's also hard to predict where fires are going to occur. So, in some locations, it has been an issue in the past and that's why thankfully, fire managers are very good at planning for if we do run out of jet fuel at some locations."

Hot, dry conditions could mean another active wildfire season, and if multiple large fires break out around the west, each would require the immediate need for fueled firefighting aircraft.