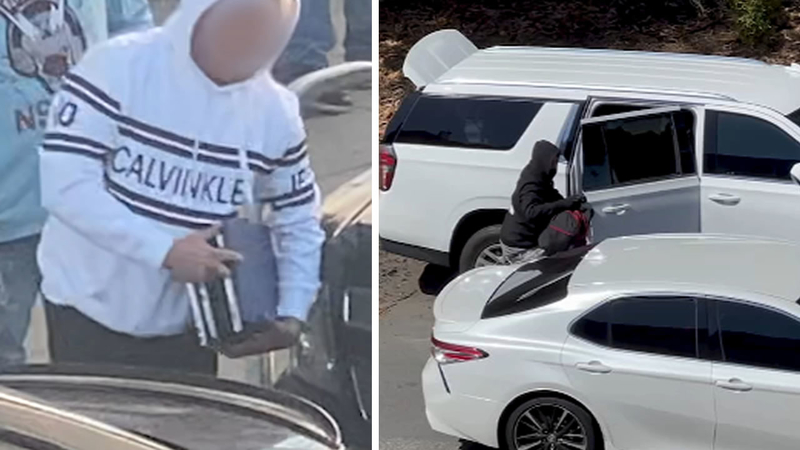 SAN FRANCISCO (KGO) -- A San Francisco resident recorded stunning video of yet another car break-in, and a police cruiser right behind the getaway car. But, no arrests.

San Francisco police tell us the number of car break-ins is vastly underreported. They won't even assign an officer to take a report; they are short-staffed and have to focus on violent crime. But, we are increasingly seeing residents who have handed evidence to the police on a silver platter.

The I-Team's Dan Noyes first showed you a fencing operation at San Francisco's Garfield Square less than two weeks ago; stolen laptops and luggage from car break-ins, bought and sold. The neighbor who gave him those pictures said he sent all the information - including license plate numbers and faces - to the police starting last September.

Dan Noyes: "Did you see any crackdown? Did the police do something that you could see?"
Resident: "No, no, nothing that I'm aware of. Given how blatant and brazen it is, it's alarming that it would take this long to do something about it."

Now, another neighbor at Garfield Square is coming forward, shocked after seeing that first I-Team investigation.

Resident: "I thought, oh, my gosh, this is exactly what I've been capturing this whole time."

He also took video of the fencing operation with some of the same players - laptops sold, money exchanged for a full backpack of them, he believes - but also, what may be items stolen from the city's retailers, from packs of diapers to a Gucci duffel bag.

Resident: "Between three o'clock and seven o'clock is when it happens 100% of the time."

Texts and emails show the SFPD seemed interested: they set up a shared file for him to send video, told him they were working on a surveillance team and that they would look into giving him the $100,000 reward if they made arrests.

A spokesperson for the SFPD told me, neither Chief Bill Scott nor any of the brass would appear on camera for this report but sent a statement that reads in part, "We follow-up on every lead and conduct thorough investigations so we can present the best possible cases to the District Attorney. These investigations take time and we appreciate the community's patience and understanding."

The community's patience is wearing thin as videos like this keep coming in.

Christian Stiehl was in his apartment overlooking Panhandle Park on April 16 when he heard a car window break. He started recording with his cell phone as the criminals returned three times, taking more luggage from the SUV on each pass.

Christian Stiehl: "But the third time they came back, there was a whoop whoop sound and SFPD had just happened to be driving by."

SFPD Unit 420 is just seconds behind the thieves who speed off, but department policy does not allow officers to pursue suspect vehicles for simple property crimes.

That's what Tracy Poon found out.

Her rental car was ransacked, and after Stiehl told her the squad car was so close, she went to the nearest police station to find out what happened.

"You know, don't you have any information in the system that you can tell us whether or not they were able to stop the car? So he said, 'No, this is not Hollywood,'" said Poon.

Tracy, her husband, two sons, and her parents had just arrived from New York for vacation; too early to check into their hotel. They went for a walk in the park. Along with five suitcases, five backpacks, $1,000 cash, a work laptop, they lost other unreplaceable items.

Tracy Poon: "My little one, he lost a teddy bear that he really treasures, you know, he had it for a very, very long time."
Dan Noyes: "If you had a chance to tell the chief of police something about the way they handled your case, and the way that they treated you, what would you tell the chief of police?"
Tracy Poon: "I take responsibility, I own what we did, you know, we really should have been more careful, which is something that I'm not in denial. But, at the same time, I just wish that they can put some more effort into helping the victims."

No question, these car break-ins are hurting the city's image as a vacation spot. A spokesman for Chief Scott told me he was not available to discuss this report, but they are working on a time for us to meet and have an in-depth interview about these issues we've been spotlighting.