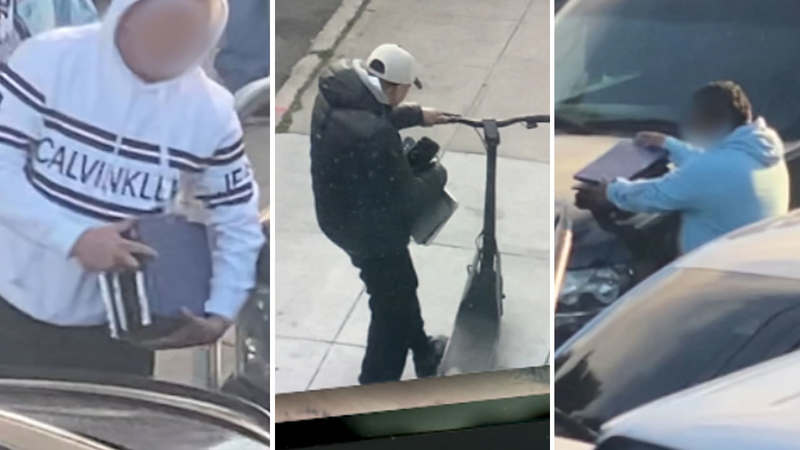 SAN FRANCISCO (KGO) -- We're getting a firsthand, overhead look at a fencing operation for stolen goods, showing what happens after all those car break-ins we've been highlighting at ABC7 as part of our campaign to build a better Bay Area. One very frustrated San Francisco resident brought his complaints and his video to the I-Team's Dan Noyes. And now, a day after our original report aired, city officials are responding.

A day after our I-Team story aired, a spokesperson for Chesa Boudin fired back late Friday, saying the SFPD made arrests in less than one percent of car break-ins last year.

Week after week, month after month, he has watched stolen goods being bought and sold right outside his window. He reported it to police more than seven months ago but heard nothing, so he called me.

The ABC7 I-Team tweeted last week I was researching this story about car break-ins, and pictures from victims came flooding in. Broken glass is such a common sight in San Francisco.

So are clips of criminals breaking into cars, even with people inside them. Remember that rush-hour heist last year? And the violent robbery of a Canadian camera crew at gunpoint on Twin Peaks two weeks ago.

Now, for the first time, we're seeing what appears to be the next step in the criminal enterprise, an open air market for stolen goods at Garfield Square in the Mission District, often when kids are playing soccer just feet away.

One tech worker who lives nearby and didn't want to show his face or use his name has been documenting the trade in stolen goods for more than a year now, and wants it to stop.

"I started recording and realize that they're really exchanging electronics usually," he said. "So like a large number of laptops, iPads, cameras, things like that were getting passed back and forth out of these cars."

On this day, a group plays dice for money on the sidewalk. Car pulls up, some negotiation, several laptops appear, he hands money to the driver, has to get more cash from a friend, another guy takes the laptops away, another car pulls up, more cash exchanged, another laptop. All in about five minutes.

The resident told us it happens all the time, "Any time. I kind of like spend some time watching it every week, usually like every day."

One day he watched someone buy a stolen messenger bag from a car and take it to the corner trash can. He said at the time, "They look like passports or something, dude, what? Yeah, they're throwing it away."

The laptop was gone, but the resident recovered the bag and a passport, tracked down the owner, and returned the items that night.

Just last week, he watched a briefcase being sold on the street; then, recovered plane tickets, a visa, and vaccination cards and returned them to a businessman from Mexico. Thieves had broken into his rental car at Waterfront Plaza.

The resident also caught one of the men changing license plates and told the I-Team, "They're clearly doing something to try to hide their tracks."

And another, struggling to transport some laptops and accessories. The resident laughed, "And so he tries to get on a scooter, just starts dropping it because he can't carry it all."

He wants all this to stop, for his family and others who walk right through this day in and day out. He wrote an extensive, detailed email to the San Francisco Police Department last September and received a call from an investigator, then nothing for months.

Noyes: "Did you see any crackdown? Did the police do something that you could see?"
Resident: "No, no, nothing that I'm aware of. Given how blatant and brazen it is, it's alarming that it would take this long to do something about it."

So, the I-Team started asking questions. First stop, San Francisco City Hall to speak with Hillary Ronen, a supervisor for the Mission District.

Noyes: "Have the police been aggressive enough do you think in addressing these things like this resident who sees the open air market for stolen goods?"
Ronen: "No, I mean, no, they haven't."

Ronen has a plan that, she says, would stop the Garfield Square fencing operation and the Mission's street vendors who sometimes sell items stolen from the city's groceries and drug stores -- a permit system enforced by the Department of Public Works.

She told the I-Team, "If they don't have a permit, then DPW can confiscate their goods and say you can't sell."

RELATED: These 3 crime fighting apps aim to protect you and your property

Ronen admits she and Mayor London Breed did not consult the police while coming up with the new law.

Noyes: "Were the police involved in that process?"
Ronen: "No, there weren't."
Noyes: "Why not?"
Ronen: "Because we want police focused on the bigger issues on the violent crimes. And we, this is so widespread and doesn't need them."

Next, I went to the Mission Police Station. Captain Gavin McEachern told us the resident's email about Garfield Square came in, before he took over, "Me, and being a police officer, I would have jumped all over that, we would have had, you know, we would have been on it."

It's been seven months since the lead came in, and investigators are still working the case.

VIDEO: A grim reality of SF crime: It's here to stay for 'a decade'
EMBED More News Videos

McEachern said, "The way he laid things out with license plates and descriptions, and things like that. I mean that gives us a lot of investigative leads that we can certainly follow up on."

The captain also told us about one obstacle to catching those who break into cars - the SFPD does not allow high speed pursuits for property crimes, and the criminals know that. They often just speed off, free to break into more cars at another time and place.

Ronen and Breed have sponsored a new law that requires proof of ownership and permits for anyone selling goods on the street, whether it's this fencing operation or the Mission's sidewalk vendors. But, instead of police, the plan is to have Department of Public Works staff enforce it.

Ronen told the I-Team, "If they don't have a permit, then DPW can confiscate their goods and say you can't sell."

"How are you going to enforce that?" she asked. "Where's the teeth? Because an ID badge key card, you show that to someone, someone's gonna laugh in your face, versus you see an officer walk up in a uniform, you know, hey, what are you doing? Where did you get that? We can we can go a little further."

On Friday afternoon, a spokesman for Mayor Breed told me police still have a role with stolen goods - they'll respond if DPW staff have problems enforcing those permits.

The mayor said, "It's critical that we have a lawful, permitted system for those who want to sell goods on the street, and a way to enforce against those who are setting up illegally and selling stolen goods."

The police union president says officers are hamstrung by District Attorney Chesa Boudin who, in their view, will not prosecute these cases to the fullest extent. Exhibit one? The Louis Vuitton ransacking in San Francisco last November.

Tracy McCray said, "People got arrested. And then they got released. And they went out, and committed the same type of crimes. Right? And so it's just kind of this revolving door of, yeah, and you know, we catch them, but they're not really being held accountable, you know, someone cutting off their ankle monitor, because they know nothing is going to happen to them."

A day after our I-Team story aired, a spokesperson for Chesa Boudin fired back late Friday, saying the SFPD made arrests in less than one-percent of car break-ins last year, and that the police arrested only a handful of people among the dozens of suspects in the ransacking of the Louis Vuitton store.

This is the full statement from San Francisco District Attorney Chesa Boudin: "This is absolutely not true and a deflection from the well-established fact that this year more than 99% of car break-ins are not solved by SFPD. In 2022, SFPD made arrests in less than 1% of car break-ins; of those that did result in an arrest, we prosecuted 79% of them. Under DA Boudin's administration, the DA's Office has higher filing rates than the previous administration and many surrounding counties. Our office is focused on holding those who commit crimes accountable, and we are also engaged in numerous confidential operations to stop the networks organizing car break-ins and retail thefts. In fact, in the Louis Vuitton case, the SFPD arrested only a handful of individuals of the dozens of suspects, and we are prosecuting each of the people they arrested and all charges are still pending.

This is the full statement from San Francisco Mayor London Breed: "Illegal vending has become a real challenge in the last couple years due to a state law change that was a well-intentioned effort meant primarily to support low-income individuals trying to sell goods legitimately. However, this state law created a loophole where there was no legal way to enforce against anyone setting up to sell anything on the street, including stolen goods. The Mayor's new Street Vending law has just gone into effect, which gives city workers and the Police a tool to enforce against those who are illegally setting up to sell stolen goods on our streets. It's critical that we have a lawful, permitted system for those who want to sell goods on the street, and a way to enforce against those who are setting up illegally and selling stolen goods. Allowing the proliferation of stolen goods is unacceptable and requires more efforts to disrupt these crimes in the Mission and other neighborhoods in the City."

"We are grateful for our work with residents and value the information they provide. Involved citizens are our 'eyes and ears' to help promote public safety. We can't comment on active investigations, these investigations sometimes take a long time and involve various Law Enforcement partners. Anyone seeing suspicious activity should call us, a key to successful crime prevention is partnering with the community. Call our anonymous 24/7 Tip Line at (415) 575-4444; or Text a tip by entering "TIP411" (847411) in the "To" field and using the keyword "SFPD" in the text field, followed by your message"