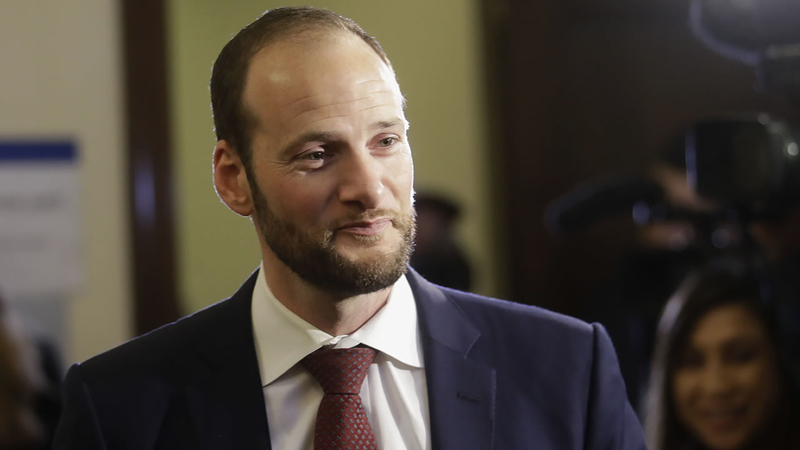 SAN FRANCISCO (KGO) -- San Francisco District Attorney Chesa Boudin on Wednesday dismissed a new poll showing him losing the recall election next month by roughly 30 points, saying in a one-on-one interview with ABC7 News that he's confident he will win.

"Absolutely I'm feeling confident," Boudin told ABC7 News anchor Liz Kreutz when asked about his chances of beating the recall. "Every single day we're talking to voters, we're talking to people when we knock on doors, and our volunteers are getting an overwhelming response."

In a one-on-one interview, San Francisco District Attorney Chesa Boudin addressed the recall he faces in June, reports of staffing issues, and concerns around crime and safety in San Francisco.

Boudin's remarks came despite a new poll released by the San Francisco Standard this morning showing just 22% of respondents are planning to vote against the recall election. 57% of respondents said they support it. 21% were undecided.

"The only poll that matters is the one on Election Day, and we've seen time and time again that polls - even rigorous polls - are way off the market," Boudin said.

Throughout the wide-ranging interview, Boudin blamed conservatives for driving the recall and said it's unfair to blame him for the problems facing San Francisco.

"What's dishonest about the recall and the millions of dollars in lies and attacks that they're spreading is that they're suggesting that all the changes in the last two years are because of my election," he said. "I wish I had the power. I wish I could do all of the things that need to be done in this city. But I am one man, we run one office, and we are facing not only historic challenges in a criminal justice system that has never worked anywhere in this country, but also a global pandemic that locked me out of my own office just two months after I was sworn in."

Many of Boudin's critics say he is too soft on crime and lenient with his sentencing. Boudin argues that he has a charging rate equal to or higher than previous district attorneys.

We asked Boudin to respond to criticism from some of his former prosecutors who have quit his office and are now working on the campaign to recall him. Brooke Jenkins - who worked in the District Attorney's office for seven years before resigning last year - told ABC7 News recently that Boudin created a "culture" where prosecutors felt pressured to offer lenient plea deals.

"It's a lie," Boudin said. "The reality is there are a lot of folks in the recall who have a tremendous amount of ambition and they won't let facts get in the way of their ambition."

Asked what he means by ambition, he explained: "Well, they've got millions of Republican dollars putting their face all over TV and they are trying to get their names on the shortlist to be district attorney if the recall succeeds, which it's not going to do."

Boudin also responded to reports that 54 prosecutors have left his office since he took office. He would not confirm that number but argued the rate at which people were leaving his office is consistent with past district attorney offices and said the "Great Resignation" is a factor.

One of the highest-profile cases that have outraged Boudin critics is the case of Troy McCalister - a man drove a stolen car into San Francisco on December 30, 2020, and struck and killed two women walking across the street. McCalister had been released on a plea deal.

Asked if it was a mistake to give McCalister a plea deal, Boudin said: "We don't have a crystal ball and when you look back at a case like his, where something tragic occurred, of course we wish we would have done something, anything, different that could have prevented what happened next."

The suspected driver in a fatal hit-and-run, Troy McAlister, has been out on parole since April 2020. Officials say he has been arrested multiple times since then, but that San Francisco DA Chesa Boudin never filed any criminal charges against him.

"We had reason to believe that he was availing himself of programs in the jail, that he had changed his ways, obviously we were wrong," he added. "Obviously we wish we could have done something differently."

Boudin argued his policies are making San Francisco and said recalling him would make the city less safe.

"I know that the recall will make us less safe," Boudin said. "It will undermine the work that we're doing. It will destabilize the District Attorney's office."

He pointed to his office's recent bust of an auto-burglary fencing ring operating out of a boba shop in the Tenderloin, saying "it will make the work we've done on projects like Operation Autopilot...unable to continue."

"It will detract and undermine law enforcement at a moment when our city desperately needs strength and purpose and vision," he added. "That's what I'm trying to bring every single day."