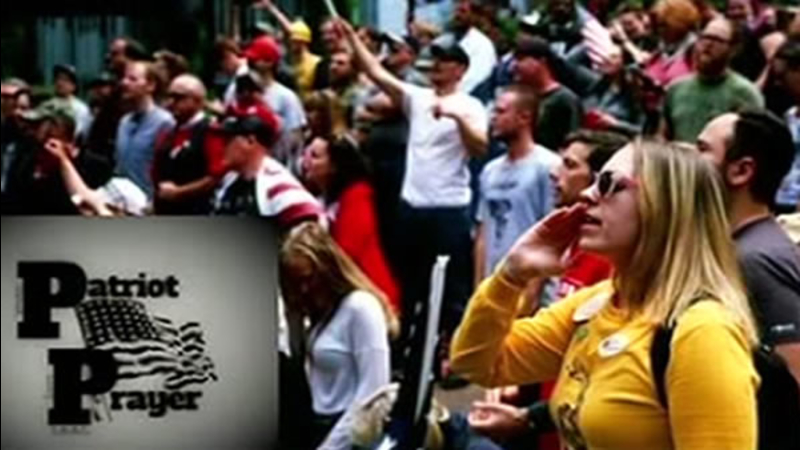 SAN FRANCISCO -- National Park Service officials announced Wednesday they have issued a permit for a right-wing rally Saturday at San Francisco's Crissy Field with heavy security measures including a ban on anything that could be used as a weapon.

Following a deadly white nationalist rally earlier this month in Charlottesville, Virginia, where a man drove a vehicle into a crowd of counter-protesters, killing a woman and injuring many other people, San Francisco officials pushed for the National Park Service to rescind the permit.

But GGNRA acting general superintendent Cicely Muldoon said in a statement today that the park service "cannot deny a permit to anyone planning to exercise their First Amendment rights based on their political stance or beliefs."

Following intensive negotiations with San Francisco police, however, the event will have security measures in place including fencing, security screening and restrictions on a long list of items that could be used as weapons, ranging from guns and aerosol cans to drones and coolers, barbecue grills, tiki torches and even selfie sticks.

#SF residents who reject racist rhetoric and violent protests should join as the Civic Center to #UniteAgainstHate https://t.co/wYIgLJVI6y pic.twitter.com/PyFcbCrN5H

A full restriction list, as well as information on road closures and other details about the park service's plans for the event, has been posted online at www.nps.gov/goga/first-amendment-permits.htm.

San Francisco police Chief William Scott said the event and counter-demonstrations planned elsewhere in the city will be heavily policed. No city police officers will be allowed to take this weekend off, Scott confirmed.

Despite the precautions, Mayor Ed Lee said he remains "deeply disappointed and opposed to the issuance of this permit."

"This doesn't calm my opposition one bit," Lee said. "I pray that nobody gets hurt on Friday or Saturday because these people with their hate-filled message are coming to our city to wreak havoc."

Gibson says he wants a peaceful rally with everyone attending but no white supremacists or radical Antifa. He says Unity is his theme. pic.twitter.com/n6AngfcRWe

Gibson has said the event has a "message of love" and stated on the event's Facebook page that "no extremists will be allowed in. No Nazis, Communist, KKK, Antifa, white supremacist, I.E., or white nationalists. This is an opportunity for moderate Americans to come in with opposing views."

In a Facebook video posted Tuesday afternoon, Gibson said that he was happy with the plans for security at the rally planned for Saturday.

Along with the Patriot Prayer event, four other political events were approved this week on GGNRA land -- "People's Town Hall Candlelight Vigil" and "People's Town Hall Press Conference" at Crissy Field on Friday, and "Better Angels San Francisco" and "Stop HATE human banner" at Ocean Beach on Saturday, according to the park service.

Lee and other city officials have encouraged opponents to not engage with members of the right-wing rally and to instead join peaceful gatherings at Civic Center scheduled for noon Friday and again at noon Saturday.

"Let us show this nation that San Francisco is a city of peace and unity," he said.

Click here for a look back at stories and videos from recent protests.


"The shameful, anti-American trend of hate-filled extremist rallies will unfortunately be allowed to continue this weekend in our city. "

Since the beginning of this process, we have repeatedly stated that the public safety of San Francisco residents and visitors is our top priority. With the event now officially permitted, the San Francisco Police Department is working with the Golden Gate National Recreation Area and the United States Park Police on a comprehensive public safety plan.

Let us show this nation that San Francisco is a city of peace and unity. Do not engage with the members of this group, whose only priority is to incite violence through divisive rhetoric. Instead of dignifying their display of hatred, we ask that residents join peaceful gatherings taking place at the Civic Center Plaza on Friday and Saturday at 12 p.m.

Over the course of history, we have been tested by movements designed to magnify our differences and sew (sic) distrust. We will not allow that fear and anger to break our spirit. Like we have so many times before, we will overcome ideologies based on hatred by showing the power of unity and compassion.

This year marks the 50th anniversary of the Summer of Love, a movement for peace, inclusiveness and unity that started in this city and spread throughout the country. Half a century later, those values still drive our city. This weekend, we will echo once again that love triumphs over hate."

"I'm disappointed that the National Park Service is allowing a potentially volatile situation to go forward, which could endanger the safety of San Francisco residents and visitors. This group has a history of violent rallies and is inviting an armed militia to participate. Now that the decision is final, our focus needs to shift toward ensuring that public safety is maintained at Crissy Field and that San Francisco sends a powerful, non-violent message of love in response to the message of hate being propagated by these right-wing extremist groups. We must respond to hate with a powerful embrace of our community's diersity. I hope everyone in San Francisco and the Bay Area, if they want to make a public demonstration on Saturday, will join me and thousands of others at the gatherings at Civic Center, Harvey Milk Plaza in the Castro, or any of the other peaceful demonstrations that will be going on away from Crissy Field. For those who do go to Crissy Field, I implore everyone to engage in peaceful counter-protest and not to engage in violence. San Francisco can show the world how we respond to hate, and that's with love."
Report a correction or typo
Related topics:
politicssan franciscocrissy fieldcrimeprotested leecharlottesville demonstrationssfpdu.s. & worldviolencediversityrallyequal rightspolice
Copyright 2022 by Bay City News, Inc. Republication, re-transmission or reuse without the express written consent of Bay City News, Inc. Is prohibited.
RELATED
FULL LIST: Rallies and demonstrations planned in Berkeley
Patriot Prayer leader, politicians weigh in on San Francisco rally
SF religious leaders take stand against violence, hatred
I-TEAM EXCLUSIVE: Permit application documents reveal federal park officials' security concerns for Crissy Field rally
PROTEST
PHOTOS: Powerful images capture Roe v. Wade protests in Bay Area
Bay Area protesters gather over decision to overturn Roe v. Wade
Supreme Court overturns Roe in landmark case on abortion rights
Rep. Speier: SCOTUS abortion ruling is 'mandating pregnancy'
TOP STORIES
Bay Area protesters gather over decision to overturn Roe v. Wade
Brian Laundrie confession letter released: 'I ended her life'
SF police urge Pride attendees to remain vigilant
SF Pride Parade and Celebration | Watch live Sunday on ABC7
How does overturning Roe v. Wade affect IVF treatments?
Companies willing to cover travel costs for those getting an abortion
With Roe dead, some fear rollback of LGBTQ+ and other rights
Show More
How outlawing abortion could worsen maternal mortality crisis
Where abortion stands nationally: State-by-state breakdown of laws
What does Supreme Court decision on abortion rights mean for CA?
ABC7's new 24/7 live stream offers local news, weather
What to know: Many fires burning across SF Bay Area right now
More TOP STORIES News