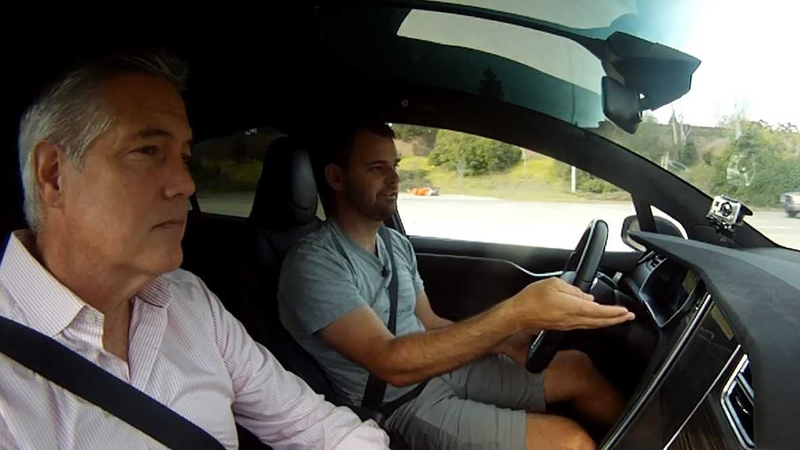 MOUNTAIN VIEW, Calif. (KGO) -- "I see what the issue is, that line in the pavement could potentially be a problem."

A Tesla Model X owner took Dan Noyes and the ABC7 I-Team to the site of the crash one week ago. What is it about a Tesla's autopilot that may have contributed to the death of an Apple engineer?


The ABC7 I-Team takes on the issue that's dominating a Tesla Owners bulletin board. The CHP told us today, its crash investigation should take six months and no one -- including Tesla -- is confirming the autopilot was on when the Model X crashed. But the I-Team has learned, it is very much a part of the investigation.

Thirty-eight-year-old Walter Huang was an Apple engineer, father of two, when his Tesla Model X crashed into an already-collapsed safety cushion on 101 in Mountain View.

His family told us Walter had complained that on 7-10 occasions, his Model X auto-pilot had veered toward that same barrier, that he brought the SUV to the dealer, but they could not duplicate the problem.

Tesla will not tell us whether autopilot was in use at the time of the crash, but an attorney and consultant from "Safe Self Drive dot-org" has an opinion based on the number of investigators on the case, including some from the National Transportation Safety Board.

"Tesla hasn't confirmed whether it was in effect," says Jim McPherson. "But I doubt that NTSB gets out of bed in the morning unless there is an automation issue."

In their online bulletin board, Tesla owners point to videos like the one we shot this morning at about the same time Walter Huang died one week ago. He was heading to work at Apple, about to take the 85 carpool lane off 101. Notice the break between asphalt and concrete, and those two white lines. Could they have guided Walter's auto-pilot right into the barrier?

Shaun Price, Director of Science for an environmental startup, drove us to the crash scene in his Tesla Model X.

"I mean, you have to think like a computer, right?," Price told Dan Noyes. "A computer doesn't know, it has no logic, so if it sees a line, it might think that's a lane."

And that raises so many issues. CalTrans has already started improving the infrastructure to accommodate automation, such as wider lane stripes in some places.

"We can imagine a day where all of our cars are in automated mode going down the road and they all fail at the same place on the freeway," Says Jim McPherson. "That raises the question at what point is CalTrans responsible to fix the road to accommodate automation."

For those unfamiliar with Tesla's autopilot, it's not to the point reflected in the company's video -- hands free driving, turn after turn.

Price showed us it will guide the vehicle in a lane, around curves, even will switch lanes when you hit the turn signal if the way is clear.

Price: "Car gets in front of me, it sees it, and it slows down all by itself."
Noyes: "I gotta say, that's the first time I felt this and it's a little jarring, it's a little surprising, wait this car is driving itself."
Price: "It's not what you expect."

Price explains a driver has to maintain contact with the wheel, to ensure they're paying attention and are prepared to override the autopilot. He also tells me he has experienced a few glitches, including a "ghost car" that popped up on the navigation right in front of his SUV, and it hit the brakes.

"It's literally a split second, it will beep at me once, the brake will go on and then it will release," Price tells the I-Team. "It'll see something in front of it that's not there. I think that's happened once or twice."

Tesla tells the I-Team Friday they are working as quickly as they can to find out what happened in Walter Huang's accident, and they are cooperating with investigators. His family says they're planning a service, probably for sometime next week.

Tesla released information later Friday evening that confirmed autopilot was on during the fatal crash that killed Huang and posted a statement to their website that reads:

"Since posting our first update, we have been working as quickly as possible to establish the facts of last week's accident. Our hearts are with the family and friends who have been affected by this tragedy.

The safety of our customers is our top priority, which is why we are working closely with investigators to understand what happened, and what we can do to prevent this from happening in the future. After the logs from the computer inside the vehicle were recovered, we have more information about what may have happened.

In the moments before the collision, which occurred at 9:27 a.m. on Friday, March 23rd, Autopilot was engaged with the adaptive cruise control follow-distance set to minimum. The driver had received several visual and one audible hands-on warning earlier in the drive and the driver's hands were not detected on the wheel for six seconds prior to the collision. The driver had about five seconds and 150 meters of unobstructed view of the concrete divider with the crushed crash attenuator, but the vehicle logs show that no action was taken.

The reason this crash was so severe is because the crash attenuator, a highway safety barrier which is designed to reduce the impact into a concrete lane divider, had been crushed in a prior accident without being replaced. We have never seen this level of damage to a Model X in any other crash.

Over a year ago, our first iteration of Autopilot was found by the U.S. government to reduce crash rates by as much as 40%. Internal data confirms that recent updates to Autopilot have improved system reliability.

In the US, there is one automotive fatality every 86 million miles across all vehicles from all manufacturers. For Tesla, there is one fatality, including known pedestrian fatalities, every 320 million miles in vehicles equipped with Autopilot hardware. If you are driving a Tesla equipped with Autopilot hardware, you are 3.7 times less likely to be involved in a fatal accident.

Tesla Autopilot does not prevent all accidents - such a standard would be impossible - but it makes them much less likely to occur. It unequivocally makes the world safer for the vehicle occupants, pedestrians and cyclists.

No one knows about the accidents that didn't happen, only the ones that did. The consequences of the public not using Autopilot, because of an inaccurate belief that it is less safe, would be extremely severe. There are about 1.25 million automotive deaths worldwide. If the current safety level of a Tesla vehicle were to be applied, it would mean about 900,000 lives saved per year. We expect the safety level of autonomous cars to be 10 times safer than non-autonomous cars.
In the past, when we have brought up statistical safety points, we have been criticized for doing so, implying that we lack empathy for the tragedy that just occurred. Nothing could be further from the truth. We care deeply for and feel indebted to those who chose to put their trust in us. However, we must also care about people now and in the future whose lives may be saved if they know that Autopilot improves safety. None of this changes how devastating an event like this is or how much we feel for our customer's family and friends. We are incredibly sorry for their loss."