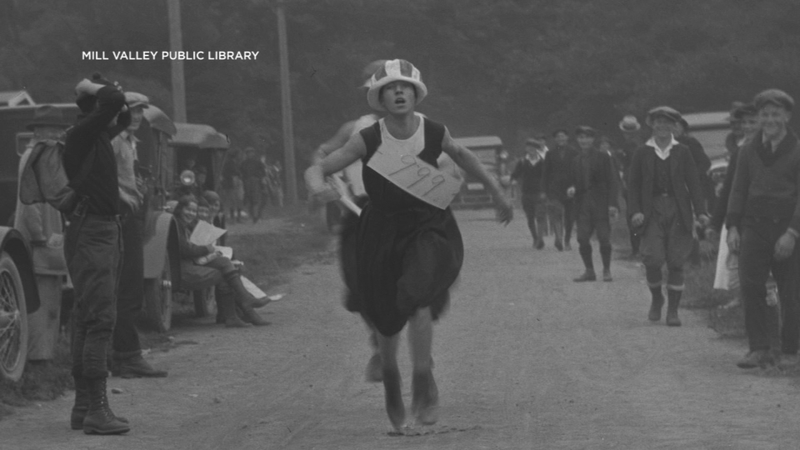 MARIN COUNTY, Calif. (KGO) -- Since 1905, athletes from all across the Bay Area and even around the world have run in the Dipsea Race, the annual 7.5 mile trail race that goes from Mill Valley to Stinson Beach. It's the oldest trail race in the country and a beloved community tradition.

But for all its fame and recognition, few know about its place in history -- in women's history -- and the fight to give women equal opportunity to participate in sports.

For decades, women were not allowed to run in the Dipsea Race, or any distance race for that matter. People thought it was too dangerous, that it would harm women's ability to reproduce, and too undignified.

But for the Dipsea, there was one exception: a five year period from 1918 to 1922. Women didn't get to join the men's race, but they did get their own.

It was called the Dipsea Hike.

"Even though it was called a hike, it was actually a race," Mari Allen, a member of the Dipsea Race Committee, told ABC7 News.

She said some women even ran it in heels.

"A lot of the women at that time were wearing high heeled, leather boots and really heavy woolen skirts or bloomers to traverse the 7.5 miles, 2,000 feet up and over Mount Tam to get to Stinson Beach," she said.

"It was a bonafide race," Spitz said. "We have pictures of people blurry with both feet off the ground, and their times certainly proved it."

Excited to share this Women's History Month story on @abc7newsbayarea abt the 1922 Dipsea Hike.

Back then, women weren't allowed to run in distance races, so what did they do? They called it a “hike.” (Of course the women ran it anyway, many getting better times than the men😌) pic.twitter.com/5yzHfXgpdc

According to Spitz, the best time was an hour and 12 minutes run by Mill Valley native, Emma Reiman.

"If you look at the Dipsea results page, a woman running 1:12 will finish quite well...to this day," Spitz said.

Speaking of today, 2022 marks 100 years since the last Dipsea Hike. It ended after pushback from detractors.

"When they finished the race and they looked like they were huffing and puffing," Allen explained of the women, "The detractors said women cannot do this. They are jeopardizing their health. They are also dressing inappropriately."

Corinne Hunt is a junior at Redwood High School in Marin County and a member of Troop 1 -- one of the first Boy Scouts of America troops to include girls. Inspired by the stories of these women, she's decided to make the Dipsea Hike the hallmark of her final Eagle Scout project. She's hand making all of the bibs for a commemorative, centennial hike taking place on April 30.

"I was really shocked, taken aback about why they weren't allowed," Hunt told ABC7 News. "In a traditional sense, this Eagle project is helping pay homage to what they used to do, which is hand made fabric bibs for all the participants and all the runners."

Hunt said even growing up in Marin she never knew about the history of the Dipsea Hike until recently when Allen brought it to her attention.

Hunt said she hopes her project shows the strength of women over generations. "Really what it means to fight for our own rights, to fight for your daughter, granddaughters, future generations," she said. "Because everything you do leaves a legacy."

The hike next month is open to anyone who wants to pay homage to the women of 1922. Participants are encouraged to wear period costumes. A similar event was held in 2018 to mark 100 years since the first year of the hike. Among the crowd then were descendants of the original Dipsea Hike runners

"It still gives me goosebumps," Spitz said. "The daughter of the winner in 1918 came, and she has a daughter and a granddaughter, and they all came...and she came with a picture that no one had seen before of her mother holding the women's cup from 1918."

That woman was Edith Hickman. Spitz said Hickman had donated the trophy to a scrap metal drive during World War II.

"So the trophy wasn't there anymore, but the picture was," he said.

It would be another 50 years until Hickman, and other women, were once again given the opportunity to race. The change came after an incident at the Boston Marathon when Kathy Switzer, disguised in a baggy sweat suit, was caught running in the race. Video of the race director tackling her was caught on camera.

"And this created a big to-do, and people said it's time for women to be allowed in races," Spitz said. "And so in 1971 women were allowed in the Boston Marathon and the Dipsea, and other races."

Spitz said the fact it took another half century for women to be accepted into the racing community makes it hard for him to say the Dipsea Hike paved the way for women athletics.

"You can't say it opened it up," Spitz said. "It tried, but it didn't succeed. People were not ready for women to compete in running."

But it's undoubtedly no less remarkable and inspiring. And a reminder -- much like Corinne Hunt, who today wears a uniform that up until a few years ago was only for young men -- of the importance of pushing and paving the way.

That change will come, even if slowly.

"I think about the women in the original Dipsea Hike looking forward to now, and I can feel them looking out over all of this and being so proud," Allen said. "And I just feel that we are making sure that future girls and future generations understand how much went into preserving all of these things, and how much women have had to do throughout history, just to be able to participate and play on an even field."

People interested in participating in the April 30 Dipsea Hike can register here.