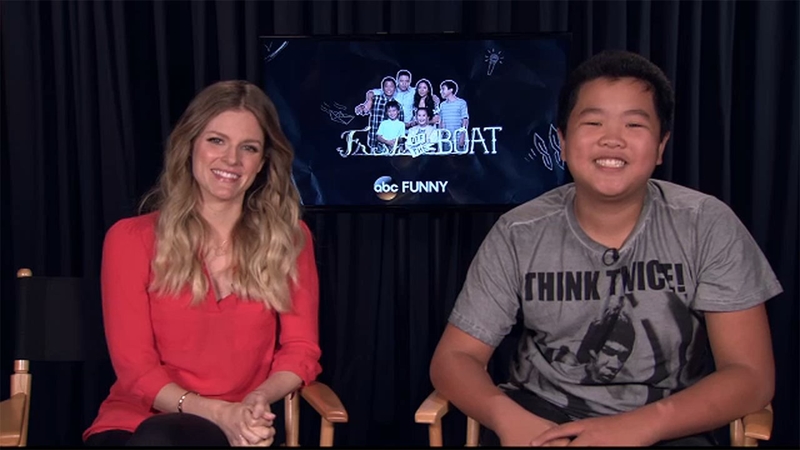 Stars of 'Fresh Off the Boat' talk about 4th season

NEW YORK -- Hudson Yang and Chelsey Crisp of ABC's "Fresh Off the Boat" talk about the big season four premiere!

"Eddie," played by Yang, is starting high school. He said it's interesting that people have seen him grow up on TV. He noted that even some of the pictures on the set show him as a little guy and he's nearly as tall as his TV dad, Randall Park!

"I'm growing taller than everyone in the family, I'm already the same height as Randall, so as I get older, I'm getting taller and I don't know how they're going to fix that," Yang said.

Meantime Crisp who plays "Honey" says that her character and her husband are still dealing with the Huangs as house guests. That comes with the usual hilarity of course!

"To whatever degree it goes on, it's a little too long for Honey!" Crisp said.

But, she is still best friends with Eddie's mom "Jessica" played by Constance Wu. They appear on "Best Friend's Week" on "Wheel of Fortune!" They actually got to visit the set and even tried their hand at the wheel.

"Pat and Vanna were so welcoming, it was like being in their house!" Crisp said. "They were all in on the scenes, they gave great performances."

"We all got 'Wheel of Fortune' hats!" Yang said.

Crisp also noted that the show will be tackling a very important story arc, but wouldn't reveal very much, or actually anything, about what it involves!

"We're going to tackle a completely new issue, something we've never dealt with before that is being done in such an amazing way, and we're really excited about it," Crisp said.

Don't miss the season premiere of "Fresh Off the Boat" on Tuesday, October 3rd at 8:30 p.m./7:30 p.m. C.
Report a correction or typo
Related topics:
arts & entertainmentfresh off the boatabcabc premieres
Copyright © 2021 KGO-TV. All Rights Reserved.
ABC PREMIERES
'Bachelorette' Katie makes shocking elimination to get to her final 4
One of Katie's 'Bachelorette' breakups brings the other men to tears
Katie speeds things up with Blake, deepens connections with others
The most brutal rose ceremony dumping; Blake joins 'The Bachelorette'
TOP STORIES
California Dreaming: The Future of the Golden State | Part 3
SF tenants get 6-figure buyout to leave luxe unit
Health officials respond to self-prescribed COVID booster shots
Coronavirus updates: SF in midst of 4th surge due to Delta variant
Disney joins list of companies requiring vaccine for nonunion workers
Experts explain why it's safe for kids to return to school
CDC document warns delta variant spreads as easily as chickenpox
Show More
Here are the Bay Area cities with the lowest vaccination rates
What we know about the delta variant
Things to do in Bay Area: Aloha by the Bay, Sonoma County Fair
'Hamilton' in SF to require proof of vaccination, masks
SF Giants reach trade deal to acquire Kris Bryant from Cubs
More TOP STORIES News