KGO
By David Louie
SAN JOSE, Calif. (KGO) -- The Santa Clara County Fair is one of the shortest in the Bay Area, running only four days. And its future is uncertain as the county is considering new development on the land. But there are die-hard fans who don't want it to fade away.

In its heyday, some 40 years ago, the fair used to draw about 250,000 people. Last year, attendance was around 40,000. Those who have gone over the years say the fair has really shrunk.

Longtime fairgoer Tye Mason says, "I liked it when it was a lot more rides, a lot more attractions, a lot more stuff, yeah. I enjoyed it then."


When asked if this means the fair is sort of dying out, he said, "It seems like it, yes."

Thanks to visitor surveys and gimmicks, such as a $1 entry fee for opening day, the fair is working hard on a comeback.

San Jose resident Monet Guido, 15, was at the fair with her grandfather, who has been going to the annual event since he was a kid.

"Well, the fair only comes around once a year, while Great America is always there, so it's always nice to go to something new instead of being at the same old thing all the time," said Guido.

5 year old Ellie Parker of #RedwoodCity pets a piglet at the @SantaClaraFair. It's a smaller fair but many hope it won't fade away. At 5pm. pic.twitter.com/cDJuoq3XiI

The county is considering redeveloping the 160-acre site. This year's fair is expecting to lose as much as $200,000, but will make it up with revenue from other events held at the fairgrounds.

Rides, food, and animals are still major components of this fair. Some city dwellers have never seen animals like those featured at the fair.

It's is also a showcase for 4-H clubs and an opportunity to win ribbons.

"It promotes all these great things that people do with their animals. It's a community, you don't want to get rid of that," said 4-H entrant Gus Robison. Can You Handle the Deep Fried Buffalo Chicken Chimichanga? 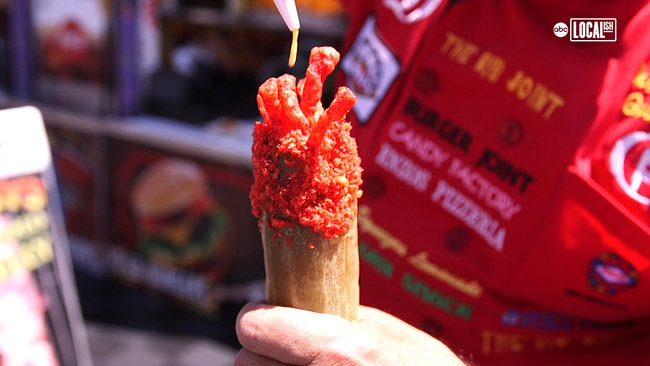