ICF technology is not new, but it is not commonly used yet. Many people don't even know it's an option.
KABC
By Phillip Palmer 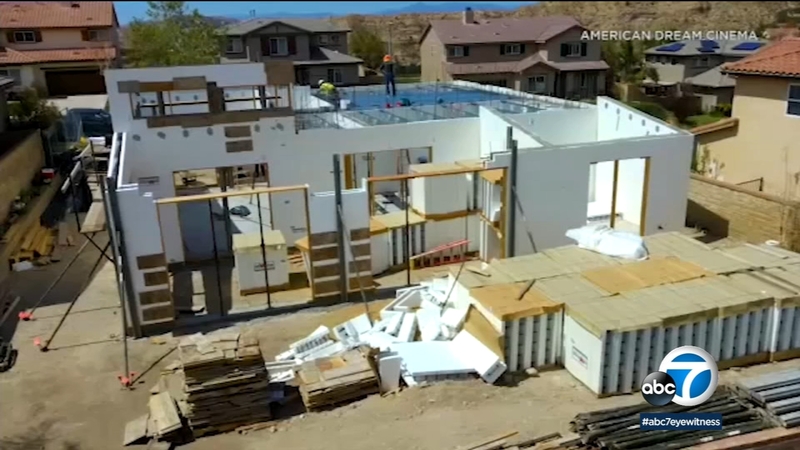 SANTA CLARITA, Calif. -- In the early morning hours of October 25, 2019, the Palos family watched and wept as their home became a casualty of the Tick fire in Southern California. It was the only home in their Santa Clarita neighborhood to be completely destroyed.

"Going from having everything to having nothing is an unbelievable experience because you just don't know where to go," said Ann Palos about losing her family home.

In that moment Ryan Palos turned to the internet knowing he never wanted to worry about wildfires again. "I Googled it, 'Fire proof home.' That's where the genesis was of this," said Ryan Palos, Ann's husband.

This image of a fire ravaged suburb of San Diego with three homes still standing caught his eye. These homes were built with insulating concrete forms and not with wood.

"The photo of it after the fires went again? Three homes utilized this same technology and survived," remarked Ryan.

The story of fire in California is two-fold -- drought and disagreements over forest management and millions of people living in the urban-wildland interface.

"The materials that are used in the structure will not ignite. There's no wood in the structure," said Laurie Fisher, an architect with Phoenix Architectural Services. Fisher and Phoenix Development bills themselves as the only design/build team in California specializing in ICF (insulating concrete forms) construction and design. That teamwork streamlines the effort to rebuild while the building materials also reduce the cost.

The foam bricks interlock and are then filled with concrete which won't ignite in a fire. Termites, dry rot or damage to wood from the sun also will never be an issue. Built floor by floor, the foam and concrete also provide incredible insulation, using roughly 50% of the energy needed to heat and cool a home of similar size.

The core also prevents fire by slowing the conduction of heat from one side of the wall to the other. In testing, ICF wall segments didn't allow enough heat through to start a fire on the cool side of the wall for 2 to 4 hours.

Another advantage of the home built this way? It's pretty much sound proof.

The build began in January and the family expects to move in by July. A synthetic stucco will be applied directly to the foam outside and will look for the most part like any other home on the street.

"The only difference is that we do have a standing seem metal roof. It does not ignite, it's non-combustible construction. No matter how many sparks fall on that roof, it will never burn," said Fisher.

ICF technology is not new, but it is not commonly used yet. Many people don't even know it's an option, but that's something the Palos family hopes changes.

"For us not to know about it is frankly kind of scary," Ann Palos reflected. "Thank God he found it. I think this is something everyone should know about."