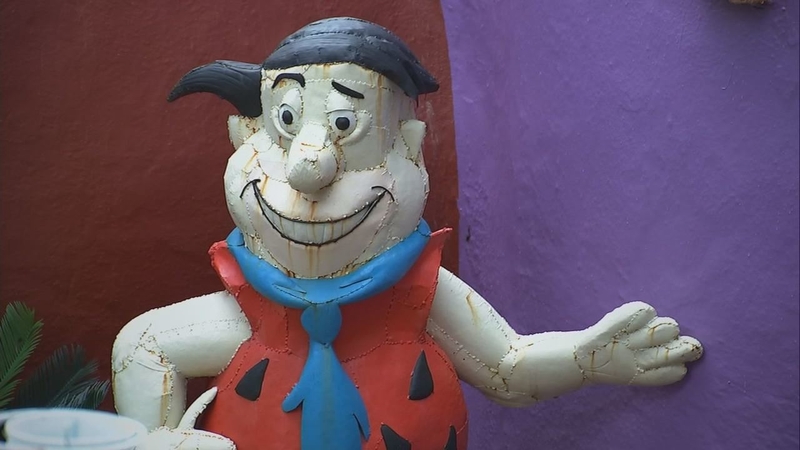 HILLSBOROUGH, Calif. (KGO) -- The City of Hillsborough is suing the owner of the so-called "Flintstone House" for creating structures, statues and home improvements without permits. Homeowner Florence Fang told reporter Vic Lee she will fight the city and gave ABC7 News an exclusive tour of the unique, stone age home.

"Thank you for giving me a chance to tell my story," she said.

The homeowner gave ABC7 News an exclusive tour of the house and told us she is fighting the City lawsuit against it.

She declined to go on camera but gave ABC7 News an exclusive tour of the now controversial Hillsborough residence.

RELATED: Take a look inside Hillsborough's 'Flintstone House' in 1987

What's most striking is there are no square rooms, only curved lines everywhere.

In the front yard stands a lifesize statue of Fred Flintstone. He's joined by his wife Wilma and baby dinosaur Dino, and of course, dinosaur eggs.

In the backyard, away from the public street, there are large dinosaurs, a giraffe, and even Bigfoot surrounded by colorful mushrooms.

VIDEO: Inside Hillsborough's 'Flintstone House' before it was colorful controversy

It's peaceful and private, but the view of the 280 freeway also reminds her that she's not isolated from the world, or from the complaints of some residents and the City of Hillsborough which is suing Fang for creating what it calls a "highly visible eyesore."

Fang thanks her many supporters who have contacted her through social media.

"It makes me realize that I am not the only one fighting for the legendary Flintsones. It is truly an American memory that makes people smile and feel good about themselves."

She says the house and fixtures make her happy.

It makes her grandchildren happy as well.

"Let's keep Fred and the Dino alive and work together to keep on," Fang said. "I will fight the best I can. Stay tuned."