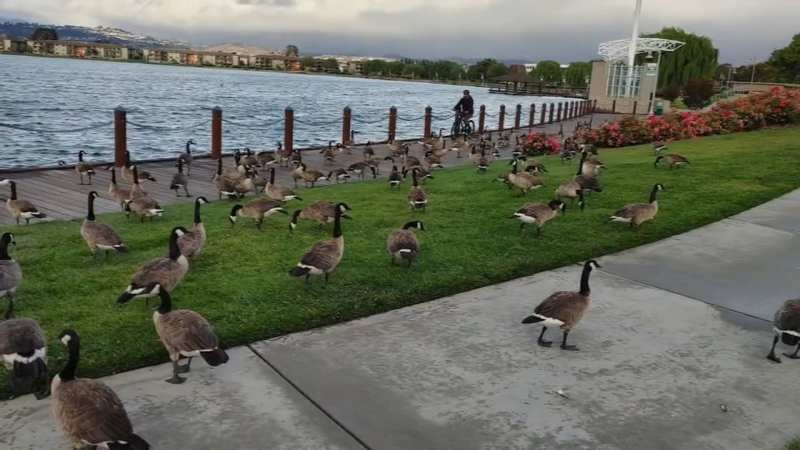 FOSTER CITY, Calif. (KGO) -- There is a battle brewing over Canada Geese and one Bay Area town's push to get rid of them.

Foster City officials say the animals pose potential health risks to humans. They are now trying to acquire permits that would allow them to kill a limited number of the geese.

City officials sent us a picture showing bucket loads of, how do we say this in a sanitary way? Bucket loads of Canada Geese droppings in Foster City.

Thousands of crows are leaving Downtown Sunnyvale residents and visitors with a list of grievances. Here's how the city plans to deal with them.

The city says that's because the Foster City Canada Goose population has yielded what they call "an unsustainable rate of population growth." From 181 geese in 2020 to 323 in 2021, and indications for a higher number in 2022. They say the animals pose a potential health risk for humans.

"It's a problem most of the time, poopoo problem, we cannot walk here, we can not sit on grass, it's always dirty, they are always fighting with each other," says Kaur.

Foster City officials say they've tried nonlethal deterrents like fogging, bringing in dogs, and certain birth control measures in the past but with limited success. Now they are attempting to acquire permits to allow lethal removal, or killing of a limited number of geese. The reaction inside and outside of Tuesday night's City Council meeting was a bold one against the idea.

"They were here first and for 40 years they were fine, and now all of a sudden, they are dirty because someone complains about poop? They're not thinking right, they've made a mistake," says a Foster City resident by the name of Lynette.

"Nobody wants the feces around but how do we really balance that? I just think they're moving too soon on it," says Michael Schultz of Foster City.

"The solution is to co-exist, like I said, there is geese everywhere, it doesn't seem to be a problem for other cities," says Erik Allen of Marin County.

No action or decision on this matter has been taken here. Foster City officials are still trying to acquire permits so that lethal removal would be an option.

At least five homes in a Lafayette neighborhood had lawns torn up by feral pigs.

Foster City released this full statement to ABC7 News when asked about this issue:

"The Canada Goose is a migratory bird, but due to the favorable conditions offered locally, has taken permanent residence in and around Foster City. The reluctance to migrate has yielded an unsustainable rate of population growth, with the number of birds in Foster City doubling from 181 in 2020 to 323 in 2021, with indications that figure will tick higher in 2022.

This excessive concentration poses potential health risks to both Foster City residents and visitors/users of our parks and waterways. Lagoon water quality testing regularly shows high e.coli levels partly attributed to goose droppings among other factors, that have resulted in mandatory beach closures. By way of example, last year, Heal the Bay identified three Foster City beaches among the top 10 most polluted in California.
A variety of nonlethal deterrents such as fogging, birth control, dog hazing, strobe lights, egg addling, fencing and other approaches have been explored and/or attempted to mitigate the health hazard posed by Canada Goose droppings, but the success of those efforts has been limited.

With an obligation to maintain healthy waterways and inviting parks, Foster City is considering the lethal removal of a limited number of geese. The lethal option would complement other ongoing nonlethal measures and be applied selectively as a means of population control, not extermination.

No action or decision on the matter has been made, other than the direction to acquire the necessary permits should the City move forward with lethal removal. All community input is welcomed, and residents are encouraged to stay engaged over the coming weeks and months."