According to officials, the animals stop traffic, peck at cars and windows, and even pose a threat to aircraft operations.
KGO
By Amanda del Castillo 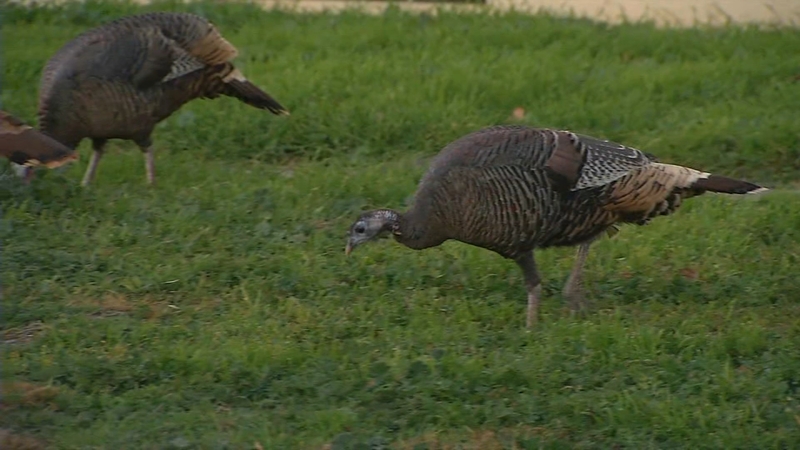 A couple dozen wild turkeys, roosting at the research center, are causing problems. According to officials, the animals stop traffic, peck at cars and windows, and even pose a threat to aircraft operations.

"And male turkeys, during mating season can be a little bit aggressive. They can kind of charge after people sometimes," Ken Paglia with the California Department of Fish and Wildlife said. "So my understanding is it's a combination of that."

Paglia said the issue is driving a new partnership to address the growing population of wild turkeys.

He confirmed NASA and the U.S. Department of Agriculture are working to trap and relocate the birds. Paglia said his agency is providing the release site.

It's all action that could prove to be easier said than done.

However, they are easily noticeable.

ABC7 News met visitor Marilee Jooste who had only spent an hour on-site, Tuesday. She said the wild turkeys stood out.

"They're huge! They're huge and there are a lot of them," Jooste told ABC7 News. "I drove past them and they kind of stared me down."

Perhaps feeling the stress of a global pandemic or America's long legacy of racism, Gerald the turkey has recently taken to viciously attacking visitors to the rose garden.

According to Fish and Wildlife, relocating wild animals isn't something the department does often. Paglia said they typically try to stay away from doing so, as it can be problematic.

"Just in this example, we're gonna have to disease test all of these turkeys. So that takes resources," he explained. "And then you know, we'd never want to take wildlife and relocate it and make it somebody else's problem."

"To be clear, this is just a protocol and safety precaution. There's no evidence that these turkeys are unhealthy," he told ABC7 News. "It's just a matter of making sure we keep the ecosystem healthy, where we'll be taking them."

In a statement to ABC7 News, NASA Ames said in-part: "While they currently pose minimal impact to the NASA community, biologists are humanely trapping and relocating them to an ecological reserve in Santa Clara to roam freely. This measure protects the safety and well-being of the turkeys, as well as the Ames community and workforce."

The plan is to relocate the wild turkeys to San Antonio Valley Ecological Reserve.

"So, if everything goes according to plan, those turkeys will be relocated to the ecological reserve," he continued.

ABC7 News reached out to the USDA, but did not hear back.