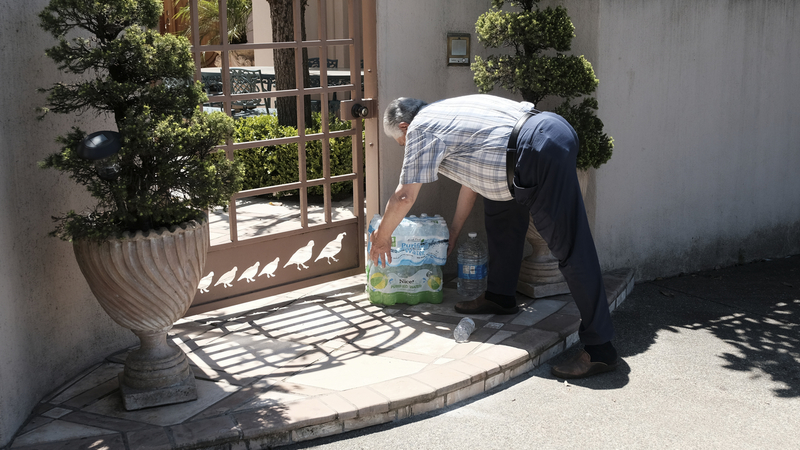 SANTA ROSA, Calif. (KGO) -- In Fountaingrove, those few homeowners who survived the firestorm take nothing for granted, anymore. Not even drinking water. Raja Naber still has it delivered. "Once a week or special request sometimes, if we use more."

Water flows through the faucet, but he and his wife still cannot drink it.

The Nabers own one of 13 surviving homes among 350 lots where heat from the fires contaminated pipes with benzene. When the Santa Rosa Water Agency reported the problem in March, they estimated that five miles of pipe need replacing at a cost of 40-million dollars. The work would delay reconstruction by two years. Or, maybe not.

"What we found is a solution to allow customers who rebuild that they will have a water supply at occupancy," said Jennifer Burke, Deputy Director of Water and Engineering Resources from the Santa Rosa Water Agency.

Even #SantaRosa firestorm victims in Fountaingrove who managed to keep their homes still cannot drink the water due to benzene in the pipes. Santa Rosa Water Agency may have a short-term fix...providing carbon filtration to every single surviving or rebuilt home. #abc7now pic.twitter.com/t2EGOzESR5

They would do so by providing every surviving and newly-rebuilt homes with an activated carbon filtration system. Raja Naber just purchased one, but has not installed it, yet. "I might take it back, now," he told ABC7 News.

RELATED: For North Bay fire victims it's hardly over

"Do you trust the system?"

"I'll have my doubts regardless."

Generally, what first appeared to be a catastrophe seems to be slightly less-so. The Santa Rosa Water Agency reports that in recent weeks, testing shows benzene levels have dropped, somewhat. They will no doubt need to replace some water pipes, but maybe not all five miles. "We're looking at flushing, cleaning, other options," said Jennifer Burke.

Her department has plenty of eyes on this issue. Water agencies across the nation want to see how Santa Rosa deals with the first documented case of fires burning so hot that they contaminated plastic pipes beneath a street.

"It is unprecedented," said Burke.