A Menlo Park gas station is charging nearly $8 a gallon for supreme-grade gasoline as the state's average price tops past $6.
KGO
By J.R. Stone 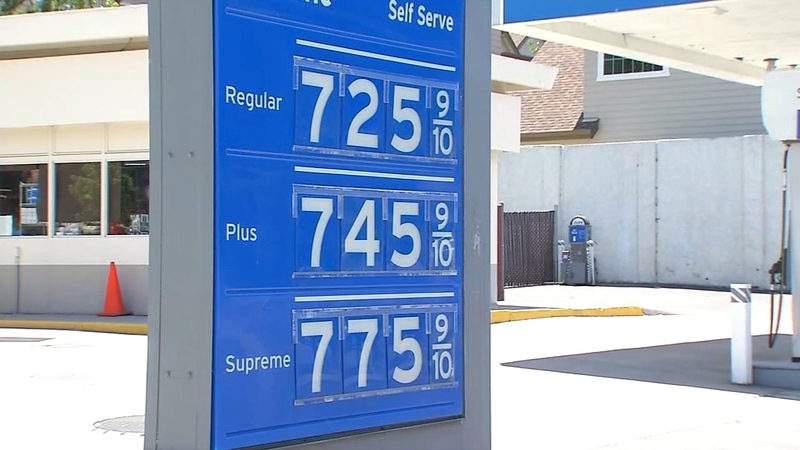 Almost $8 a gallon? Here's when expert says gas prices may go down

SAN FRANCISCO (KGO) -- A gas price of $7.25 a gallon at a gas station in Menlo Park is certainly not normal.

Countywide regular unleaded is going for $6.29 a gallon in San Mateo County.

A Menlo Park, California gas station is charging nearly $8 a gallon for supreme-grade gasoline as the state's average price tops past $6.

Statewide California is up nearly $2 a gallon in the last year.

"They are still in terms of hours worked in order to afford a gallon of gasoline, not as high as they were 10 or 15 years ago," said UC Berkeley energy professor Severin Borenstein.

Borenstein says people weren't making as much money back then. He says there are a number of factors contributing to our record costs at the pump as supply lags behind demand, saying that currently the U.S. is a million barrels a day behind what we produced pre-pandemic days.

"The decline in U.S. production is being driven largely by supply chain problems and labor. They're having a hard time getting oil workers to come back to the fields, which are generally in pretty remote areas," he said.

While a huge drop in prices is unlikely, Borenstein believes there will be an eventual decline.

"A month, six months, a year from now, it looks like we're going to see a downward trend,

"I think we'll start to see a drift downward pretty soon but it's not going to be a big drift. We're probably going to see dimes not quarters or half dollars coming off the price," said Borenstein.

And while some will continue to try to find the cheapest stations out there, others say they don't have that option.

"This place is the most convenient for me and when you have a bunch of kids and you're running around, you don't have a lot of options," said Arunamata.

According to a survey, the San Francisco Bay Area currently has the highest average price for regular-grade gas in the U.S., at $6.20 per gallon. The lowest average is in Tulsa, Oklahoma, at $3.92 per gallon.

The average U.S. price of regular-grade gasoline spiked 33 cents over the past two weeks to $4.71 per gallon.

The average price at the pump is $1.61 higher than it was one year ago.

According to the survey, the average price of diesel rose 9 cents over two weeks, to $5.66 a gallon.