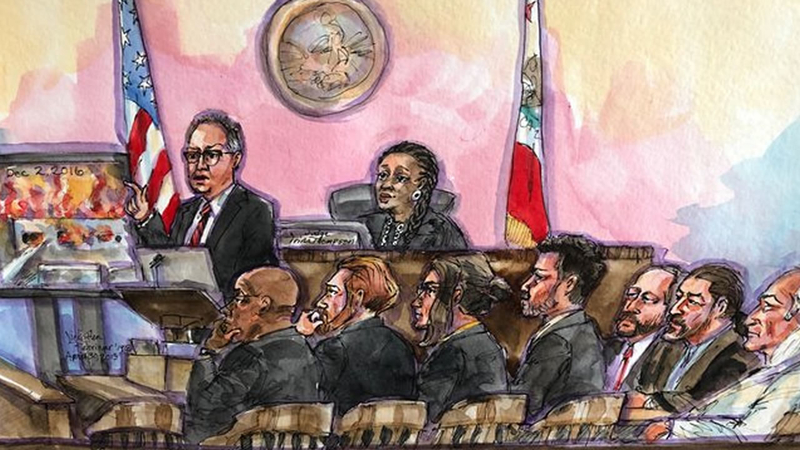 OAKLAND, Calif. (KGO) -- "No notice. No time. No way to escape." That was the resounding theme hammered on by Alameda County prosecutors in court as the Ghost Ship trial got underway before a jury on Tuesday.

Defendants Max Harris and Derick Almena each face 36 counts of involuntary manslaughter for the Dec 2, 2016 fire.

In court, prosecutor Casey Bates showed photos taken inside the warehouse the day of the fire, depicting people who would soon perish.

He slowly read through all 36 names of those who died and showed their photos to the jury of nine women and three men.

Several jurors visibly choked back tears as he showed them text messages, including one from a victim to her mother saying "I'm going to die" and another from a boyfriend who texted his girlfriend "I love you" and then ominously "fire."

Prosecutors continued with their opening statement, showing documentation that Almena signed a lease agreement for sole use of the building as an arts collective and to build theatrical sets with no subletting allowed.

Prosecutors later established that, on the day of the fire, there were 25 people living at the Ghost Ship and there were five RVs inside along with two trailers.

They later showed police body cam video of Max Harris claiming no one lived in the warehouse.

Opening statement of prosecutors in Ghost ship Trial: “ No notice, no time, no way to escape” as they read names and showed photos of 36 who died Dec 2, 2016 in Oakland warehouse fire. drawing by Vicki Behringer @Courtart #abc7news pic.twitter.com/nGjLIXTu3D

Prosecutors say there was only one smoke detector in one person's private unit in the entire 10,000 square-foot warehouse and that the only water provided was through a wall by means of a garden hose.

They described the disastrous night in vivid detail, saying that several people who escaped the fire would testify how it was all panic and chaos with thick dark toxic smoke and seemingly no way out of it.

Almena closed his eyes and rubbed his head as an attorney put his hand on Max Harris' shoulder when prosecutors played emotionally charged 911 calls for the jurors.

The parents of victims who died said it was surreal for them and they feel the loss every day. They said they want everyone connected with the fire to be held accountable.

“ the title of creative director started as a joke ...Max was Cinderella....mopped floors and cleaned the bathroom.” According to defendant Max Harris’s Atty in Ghost Ship trial. He says witnesses will say 2016 fire was arson drawing by Vicki Behringer. #abc7news pic.twitter.com/Lk5sT175Os

He added, "The people who went into Ghost Ship warehouse and set it on fire are not on trial."

Supporters of Harris were in court as well as victims' families.

One victims' father, David Gregory, said, "It's been two and a half years since I've seen my daughter. I'll never see her again. That's why we're here. I just hope the jurors see what we see."

The judge said someone on Tuesday made an illegal attempt to communicate with a juror during the lunch break. She met in closed court with the attorneys.

The opening statements will continue Wednesday in a trial that could last months.

The judge in the Ghost Ship trial says someone allegedly tried to illegally communicate with a juror during the lunch break today. Weighing what to do now. Drawing by @Courtart #abc7news pic.twitter.com/uQqBZuKBFc