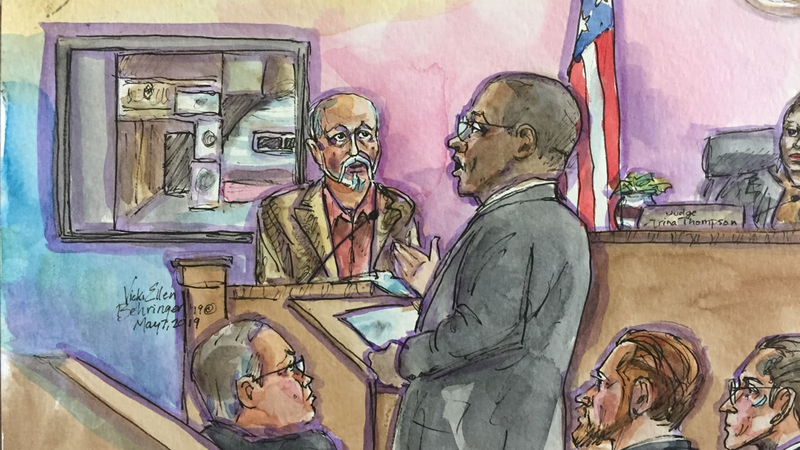 OAKLAND, Calif. (KGO) -- A former construction worker, Rodney Griffin, testified that in the years prior to the 2016 fire, he believed the conditions inside the Ghost Ship warehouse were dangerous and he tried to warn people about it, including master tenant Derick Almena.

"I told him this is very dangerous. This is a deathtrap," Griffin told the jury. "He laughed at me and said we should call it the Satya Yuga deathtrap."

"I went to the nearest fire station and talked to a chief," Griffin continued, "and he told me they were aware of conditions there."

Griffin says no report was taken and as far as he knows, the Oakland Fire Department never followed up.

Earlier in the day, jurors heard from a man who was inside the Ghost Ship the night of the fire.

Ryan O'Keefe was a volunteer at a music event at Oakland warehouse the night of December 2, 2016. He told the jury, he first saw an orange glow, and "within five seconds it had exploded into an inferno...just the speed at which the flames traveled."

"As soon as the smoke came, we had to retreat there was nothing we could do," continued O'Keefe, who was working as a volunteer "greeter" for the music event at the warehouse that night.

O'Keefe and several other people ran out the front door on 31st Avenue, but three dozen more never made it out alive, trapped on the second floor of the Ghost Ship.

Defense attorneys for Derick Almena and Max Harris claim the fire was arson. O'Keefe testified he saw no suspicious activity or people inside the warehouse that night, but did say the fire moved very quickly.

"Explosive flame pattern with no noise to an explosion," said Curtis Briggs, the attorney for Max Harris. "Deafening smoke, smoke that had a sparkly or graphite characteristic to it. Smoke that although it was a 100 feet from the fire scorched or burned the lips."

The first witness of the day was forensic pathologist Dr. Thomas Rogers, who testified about autopsies he performed for the Alameda County Coroner on nine of the 36 people who died in the Ghost Ship. All nine died from smoke inhalation.

On Wednesday, Cesar Avila, the former head of fire inspections for the City of Oakland Fire Department, will continue his testimony. He's expected to talk about whether the city actually officially inspected the Ghost Ship in the months and years before the fire.