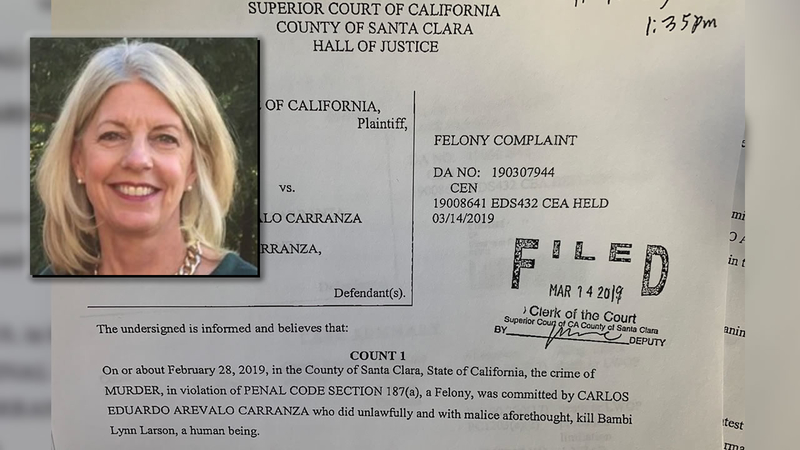 Ms. Larson suffered "extensive and deep" wounds "consistent with a cutting tool," according to court documents.

When Arevalo-Carranza was arrested by San Jose Police on Monday, he was in possession of a seven-inch folding knife.

Bloody shoe prints found at Larson residence matched the tread of the boots Arevalo-Carranza was wearing when arrested, according to the court documents.

Police say he also was in possession of the victim's tablet and cell phone.

Arevalo-Carranza, an undocumented resident from El Salvador, was deported by ICE in 2013 but returned to the U.S.

He was arrested multiple times in San Jose since 2014 on charges of possession of methamphetamine, false imprisonment, prowling and battery on a police officer.

ICE says it has filed detainer requests seven times with Santa Clara County, but they were ignored due to county policy.

The court documents do not detail how Arevalo-Carranza entered the Larson house early on February 28.

A family member and a co-worker told police they found the back door open when they went to check on Ms. Larson when she did not report for work that morning.

Police obtained security video from three cameras. One video showed a man wearing a backpack and looking "back several times in the direction of the victim's residence."

Another video showed a man discarding articles of his clothing. Police Chief Eddie Garcia earlier this week said a discarded t-shirt had DNA belonging to Ms. Larson and Arevalo-Carranza.