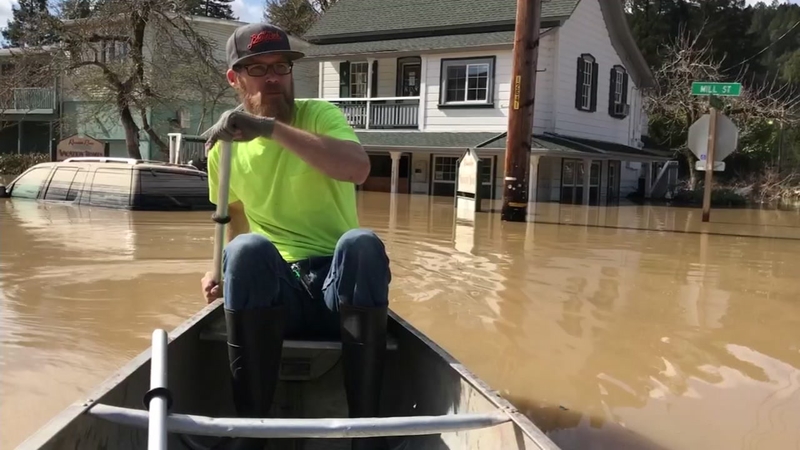 GUERNEVILLE, Calif. (KGO) -- Two months after the Russian River crested at more than 45 feet, we returned to look around and check in with some old friends.

"We hope to open in two weeks," said Lisa Flint, who owns the Farmhand Deli with her husband, Jason.

For eight weeks, they have toiled after five feet of water left slippery river mud on their floor and nearly wrecked everything.

The Flints did not have insurance, but didn't want to ask for a handout. Instead, they sold $10,000 in gift certificates. "It worked," said Lisa.

This is what recovery looks like in #Guerneville, this morning. That's Jason Flint, owner of The Farmhand Deli, right next to the river. They expected maybe one foot of #RussianRiverFlooding. Instead, it came in chest-high. #abc7now Today is Jason's 38th birthday. pic.twitter.com/OFnV91Xloz

FEMA never kicked in with assistance. Aside from some help from the county and state, Guerneville has been on its own.

"We're resilient," said Jeff Bridges, who owns the R3 Hotel on Mill Street at 4th. He still has a long way to go before reopening, but the place is taking shape. "We're resilient. All the demolition is done. Now it's the rebuild. That can go pretty fast. It's a minor inconvenience," said Bridges with a wry smile.

We found plenty of progress. Garbage that washed away, came to rest on the river bank, and piled up on streets, has disappeared. Tomorrow, the Chamber of Commerce holds its annual Spring Fling from 1 p.m. to 4 p.m. Locals say the event has has added significance, this year. "It's like our coming out of the flood party," said one resident.

"What have you learned from this?" we asked Wendell Joost, the former undertaker and town sage. "That it will flood again," he said. "And that when a flood hits, we're here for everyone. If you have a canoe, you share it. If you have a fan, you give it to someone else to use as soon as you're finished with it."

"And when you find someone who works for you, stick with him," said Lisa Flint.

Parts of Guerneville are still a mess, yes, but oh so much better than two months ago.

The Chamber of Commerce event featuring food and wine from the Russian River area hopes to bring some much needed tourism dollars to the recovering Sonoma County.

Lisa Flint on how they raised money to pay for repairs at the Farmhand Deli in #Guerneville after the flood, two months ago. #abc7now pic.twitter.com/cd0DzzfRun

Piles of flood ruined and now wet garbage line streets along the #russianriver . Residents want help from #SonomaCounty in removing it. And they want an emergency declaration. ⁦@fema⁩ #abc7now #Guerneville pic.twitter.com/8wkSVTBKMY

R3 in Guerneville. The escaped koi return to their pond. #abc7now pic.twitter.com/ruy1dx3api