The newly renovated space includes bedrooms that vary in size. Some have four beds, others just one bed.
KGO
By Liz Kreutz 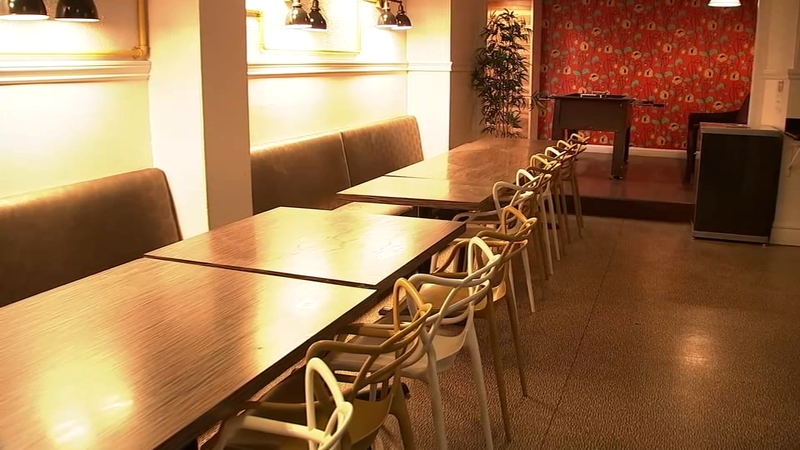 SAN FRANCISCO (KGO) -- At Post Streets between Leavenworth and Jones, final touches are underway to convert the former Ansonia Hotel into a homeless shelter. And it certainly isn't a typical one.

ABC7 News was given an exclusive first look inside the building.

We saw the newly renovated bedrooms that vary in size. Some have four beds, others just one bed. Many have private bathrooms, showers and locker spaces.

INSIDE 711 POST STREET: @abc7newsbayarea got an exclusive first look inside the former youth hostel turned homeless shelter. It’s certainly not your typical shelter.

There’s community spaces w/ a pool/foosball tables. A coffee bar for breakfast. And even a library w books/wifi. pic.twitter.com/wsC1NFbJlc

On Tuesday night, the San Francisco Board of Supervisors approved the $18 million shelter, which will house as many as 250 people at any given time. It's expected to open late next month.

Because it is a former youth hostel, the space already has resources already built-in. There's a laundry room, communal spaces with pool and foosball tables, and even a library with books. The city says they hope to install WiFi, too.

"I think this is an extremely attractive building for people," Shireen McSpadden, the Executive Director of San Francisco's Department of Homelessness and Human Services, said.

Here’s more pictures inside the new 711 Post Street shelter. @UrbanAlchemyUA is the group running the shelter. They will have has many as 250 residents at any given time. The hope is people stay no more than 9 months and move into more permanent housing. pic.twitter.com/rLx5XnNFbO

McSpadden said the shelter is the first of its kind in the city. Through the pandemic, as hotels became temporary homeless shelters, they learned this model can be successful in helping people transition from the streets into more stable housing.

"Human beings at our most deepest fundamental, level we need to have connection," she said. "And so what I really like about this is that it takes all of that into account and so we can create spaces for people to engage and congregate, in a really positive way."

As ideal as it sounds, some neighbors in the Lower Nob Hill area have expressed concern about the site. They say the building has at least one big flaw: there's no outdoor space. They're concerned this will lead to people congregating outside and loitering in their neighborhood.

Some neighbors have express concern that bc the building doesn’t have any outdoor space, residents will congregate and loiter on the streets.@UrbanAlchemyUA says they will have workers monitoring the neighborhood and 24/7 security. pic.twitter.com/vHc006HWTx

McSpadden said they hear these concerns. They plan to have 24/7 security at the building and Urban Alchemy workers stationed on and around Post Street.

"We want to make sure that we are good neighbors," McSpadden said. "We have agreed that we will meet regularly and check in with them about their experience as neighbors...to ensure that we're meeting their concerns, that we're addressing them, if things start to go awry in their eyes."

Dr. Miller said, ultimately, a space like this, during a homeless crisis like this, is just too good to pass up. She said she hopes this becomes a safe place where people can heal.

"What I imagine this place being is the same when people go to those spas in Sedona, or something, and just start to get their health back," she said.

"When you come into an emergency shelter, it's the beginning of stabilization," she added. "Once they get stable, that's when they can begin to heal."

The city says through the pandemic, when hotels became homeless shelters, they learned this model works. “We learned that, not surprising, people like living in smaller rooms, having more privacy,” Shireen McSpadden, the Exec Director of @SFHumanServices, told us pic.twitter.com/vJp5nP0LrR