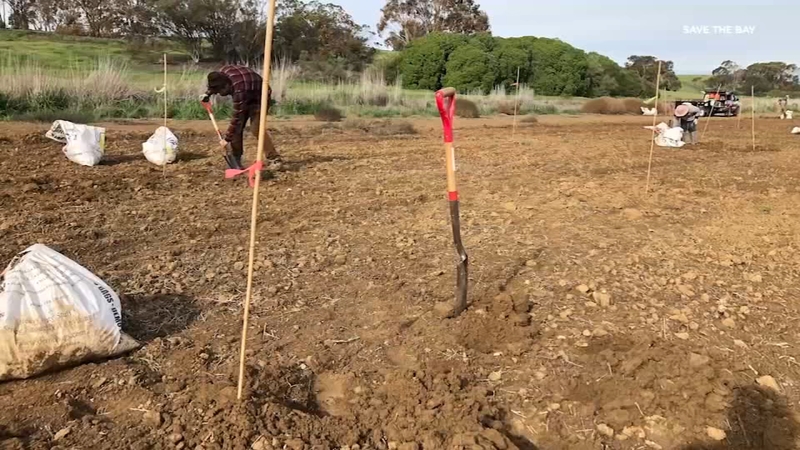 MENLO PARK, Calif. (KGO) -- Flying along Ravenswood Pond with Droneview7, it might be hard to spot the design evolution taking place on the ground. But the shoreline, near Highway 101 in Menlo Park, is being turned into an example of what 21st century levees could look like around the Bay Area and the country.

"What we're looking at here is a native plant called common yarrow," says Jessie Olson, habitat restoration director at Save the Bay. The environmental group is using native plants to green nearly 10 acres of what's known as a horizontal levee. It's a gently sloping stretch of land connecting Bedwell Bayfront Park to surrounding salt ponds.

"I think a lot of people moving into the future are thinking of more nature based solutions for these levees," says Olson.

To accomplish that vision, the Save the Bay team has been growing plants in a makeshift nursery a short distance away. Scores of volunteers have joined forces to plant the area by hand, after an agricultural team placed the original materials using heavy equipment.

"So right now, it doesn't look like much because we're only in our first year. But from a trained eye, you can already see those native plants coming up," Olson points out.

The project also echoes a movement across the country. With the growing threat from climate change and sea level rise, many environmental groups say we need alternatives to simply building higher levees and taller sea walls. Natalie Snider is with the Environmental Defense Fund, late last year the group joined nearly a hundred other organizations in drafting a letter to the Army Corp of Engineers. It called on the Corp to re-focus its planning toward nature based solutions.

"And so it doesn't have to be these strong sea walls, which, you know, actually harm the environment, and are not sustainable in the long term with climate change," says Snider.

Here in the Bay Area, Save the Bay believes the Ravenswood project can act as a pilot for future planning. Perhaps, becoming a model for major shoreline projects.

"We are learning a lot here. Hopefully we'll see success, and that will be something we can share," says Olson.

Save the Bay is also planning to expand the project soon to include another stretch of horizontal levee in the same area. Eventually greening more than 25 acres in all.