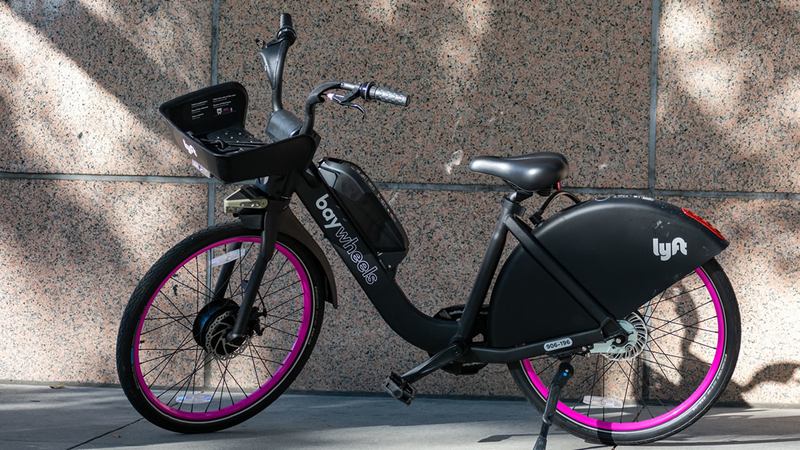 SAN FRANCISCO (KGO) -- A new report lays out three options for a municipal bike share program in San Francisco, including the city owning and operating its own program. The other is a system owned and operated by an entity and the third is one publicly owned and privately operated.

District 5 Supervisor Dean Preston commissioned that report and said he'd prefer the city own and operate its own bike share program.

"I view bike share as part of our, ideally, part of our public transportation system in San Francisco," Supervisor Preston said. "So the city runs buses, and I would love to see it where we also are in complete control of a bike share program and have a robust program and make the kind of infrastructure changes we need to make all over the city to the streets, bike lanes, dedicated spaces for bikes and really encourage a growth in transportation by bike."

San Francisco Standard discuses the current situation of Lyft's Bay Wheels, and the future of E-bikes in the city.

The report says that if San Francisco took over its own system, the operator could be SFMTA or a nonprofit set up by the city.

"It would be some fraction of that would be what the taxpayers were paying, probably more like $3 or $4 million annually," Supervisor Preston said. "So I think if it's a priority, the funds are there. I think the initial acquisition costs are the bigger obstacle. But this is expensive, but doable if this is the path that we want to take."

The office of Mayor London Breed sent a statement saying in part:

"We understand that there are costs and benefits to both transitioning and operating a public bike share program, and believe that now is the right time for that conversation and what to consider in the future."

The contract with Lyft goes through 2027.

SFTMA said in a statement: "It would be costly for the city to exit our current contract with Lyft, which continues to fund system infrastructure and operations to San Francisco and the region at no cost to taxpayers. However, now is a good time to think and plan for what comes next, and how we ensure a sustainable and useful system for the future given all of bikeshare's benefits."

SFMTA said that, as of now, no public funding mechanisms have been identified for a publicly owned bike share system.

No decision has been made on this.

Supervisor Preston there would be more transparency in terms of how much people are getting charged for using bikes. He said he's been hearing increased frustrations from people in his district and around the city facing higher fees to use the bikes.

"We don't have any real regulatory control over this pricing and we don't have even the data," Supervisor Preston said when discussing part of the problem. "We don't know if Lyft is earning huge profit through this or losing money. They don't provide that information. It was requested as part of the report. They don't share any data with the city so we're left a little bit in the dark, so I think there's huge benefits in terms of transparency, accountability, affordability and access and equity to going in a direction where there's more public control."

ABC7 reached out to Lyft for a statement.

Lyft's new e-bikes are on the street in San Francisco. The company took over Ford Bikes and renamed it Bay Wheels. This puts them in direct competition with Uber, which operates JUMP. So how do they compare?

Supervisor Preston said this could also help maximize use of bike share and make it as affordable as possible to get more people out of private vehicles.

"We're in a climate crisis, where we need to be looking at our transportation, which is the biggest source of emissions in San Francisco and we need to be thinking boldly about how do we get people walking, using public transportation and using bikes," Supervisor Preston said.