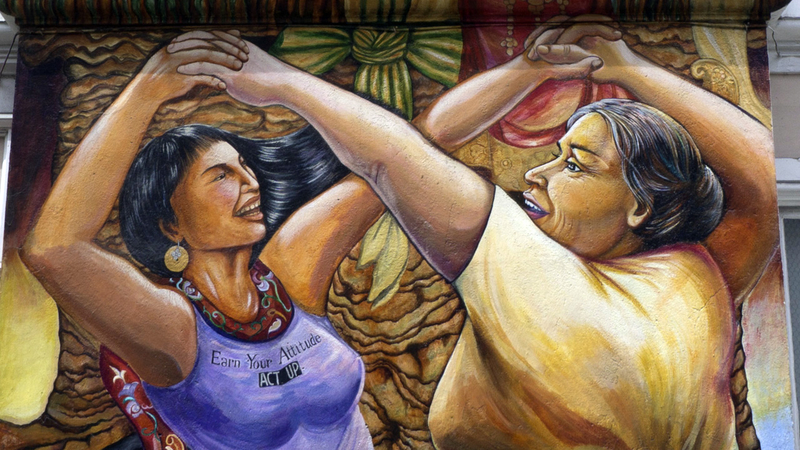 SAN FRANCISCO (KGO) -- A fundraising campaign is underway to create a book on one of San Francisco's most iconic murals.

The mural is massive. It covers four stories and stretches 165 feet on each of the two facades of the building.

Maestrapeace was painted by seven women muralists in 1994 and for the past quarter century it has been a must-see mural for tourists in the Mission District.

This year, the mural was selected as a winner of TripExpert Experts' Choice Award as a top San Francisco destination.

"We want them to be awestruck. We want people to be blown away at the alternative vision of women. The non-billboard, non-hypersexualized, non-exploitation vision of women" said Juana Alicia, one of the original muralists who is also spearheading the fundraising campaign.

The mural is covered with portraits of women. Some are well-known, like Rigoberta Menchu, who won the Nobel Peace Prize in 1992 and American painter Georgia O'Keeffe.

Others are spiritual, like the Aztec Goddess Coyolxauhqui and the Buddhist diety Dakini, or symbolic, like a painter from India or an African drummer.

VIDEO: SF muralists celebrating 40 years of brightening Mission District
"We have over 500 names women into the mural because we couldn't put in all the images of women. They are unsung. Some are grandmothers," said muralist Meera Desai.

Last month, the original seven muralists launched a Kickstarter campaign to raise $50,000 to create a tabletop book on the mural.

More information on the fundraising campaign.

The group met its goal with nine days left in the campaign, but the group wants to raise more money to cover the complete costs of production.

The book is more than just about legacy for the artists.

"Not everyone knows the story of each character. When they go to the book, they can see how each person impacted our current lives." said Desai.

If you visit Maestrapeace, pop into The Women's Building for a pamphlet that explains who the people are depicted in the mural.