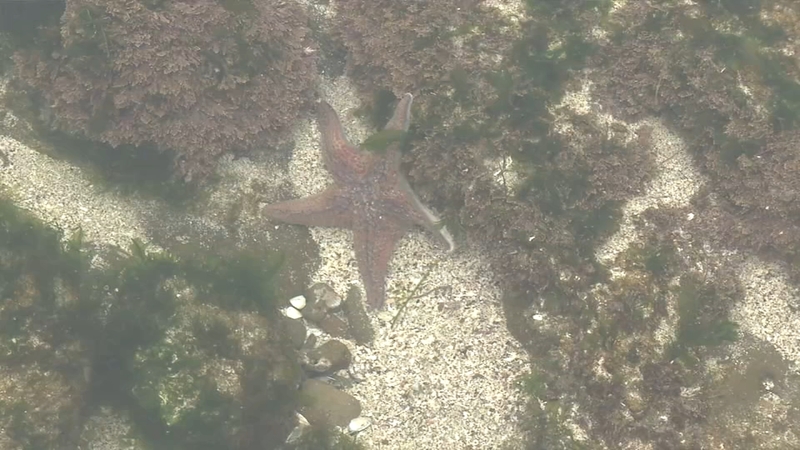 SAN FRANCISCO (KGO) -- For Dr. Rebecca Johnson, Ph.D., of the California Academy of Sciences, these tide pools near Pillar Point in San Mateo County act as a kind of early warning system.

She and her volunteers are photographing a variety of organisms to monitor what's thriving in the coastal pools, or not.

"And the work that we're doing at the Academy is taking those individual observations, and we're building what's called an early warning and forecasting system for biodiversity, change along the California coast," Johnson explains.

That data could be especially important this year, with scientists predicting a possible marine heat wave reaching the northern California coast by fall. A number of similar warming events, including an unusually strong one nicknamed the Blob, have formed in the last decade, sometimes taking a damaging toll on the local habitat and the marine life it supports.

A Leather Sea Star, spotted by volunteer Mary Wisnewski during the survey is one of several similar species that fell victim to a wasting disease.

"That basically knocked out or eliminated almost all the starfish here on this reef and also throughout the west coast of North America. And that was also the warm water was a contributing factor in the sea star wasting disease," says Johnson.

And she says the effects cascaded across the food chain, ultimately damaging kelp along the Sonoma coast. A colorful pink sea slug known as Hopkin's Rose also started showing up in the area in large numbers.

"We saw hundreds and hundreds. Like you wouldn't even be able to count. We had to stop counting," Johnson remembers.

The California Academy of Sciences in San Francisco's Golden Gate Park is home to the oldest living aquarium fish in the world.

Volunteers participate in the biodiversity survey as part of the Academy Community Science program. A smartphone app called iNaturalist allows them to upload their sample images.

"That means that you can do observations and see things for yourself. And I think people just get jazzed about it, they just get excited and they want to, you know, want to see more," says volunteer Mary Wisnewski.

And with an ocean warming cycle predicted, the growing community science movement could give researchers a critical early warning system for changes happening along our shoreline.

Next month, volunteers from the Academy and elsewhere will be taking part in a statewide survey called Snapshot Cal Coast. For information on joining and downloading the smartphone app yourself, check it out here.