On Thursday there was a long procession from Hayward to Oakland where an emotional service was held to honor Sgt. Scott Lunger.

HAYWARD, Calif. (KGO) -- Hayward police Sergeant Scott Lunger was killed in the line of duty and he was honored Thursday for the life he gave serving the community he loved.

Accompanied by a trail of law enforcement, Lunger's body was taken from a private ceremony in Hayward to a public service at Oracle Arena in Oakland.

Sgt. Lunger's sister Ciara Lunger provided words of strength with her singing of the National Anthem. 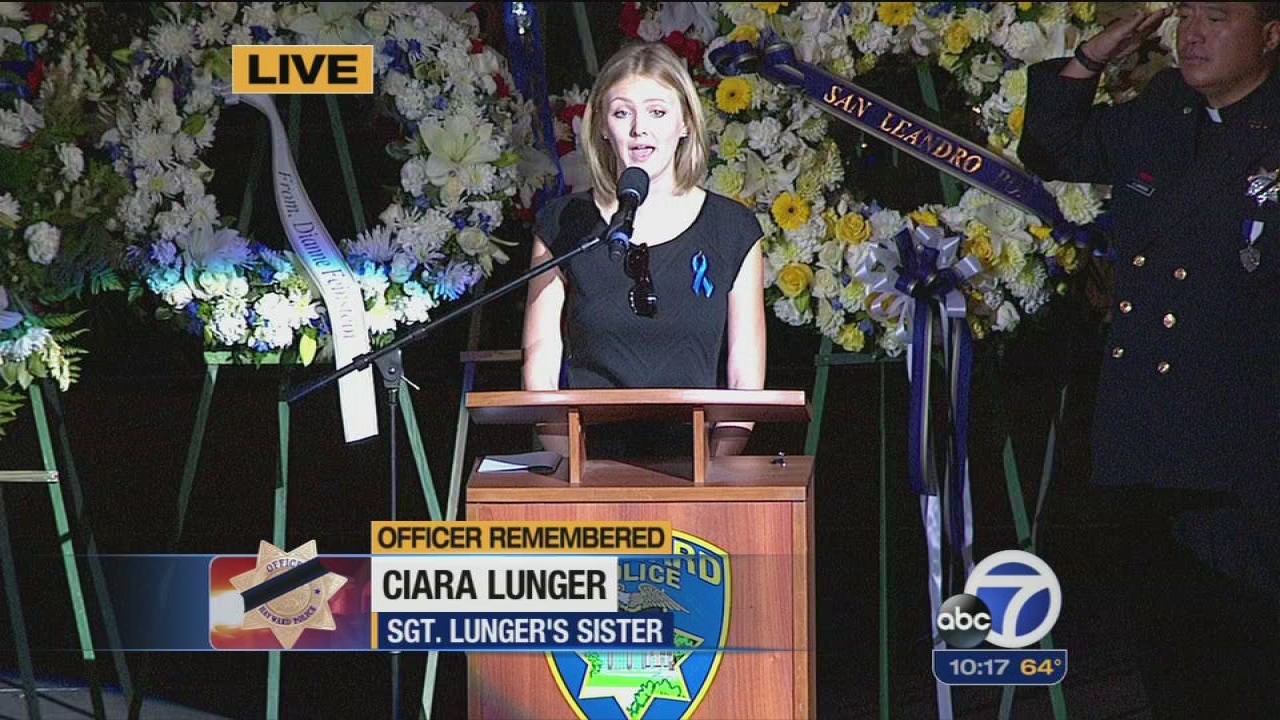 Now, an extended family in blue will watch over Lunger's daughters, Saralyn and Ashton.

"You knew this was going to happen, but you made sure me and my sister were well taken care of," said Saralyn Lunger.

VIDEO: Fallen sergeant's daughter says 'you were my best friend' 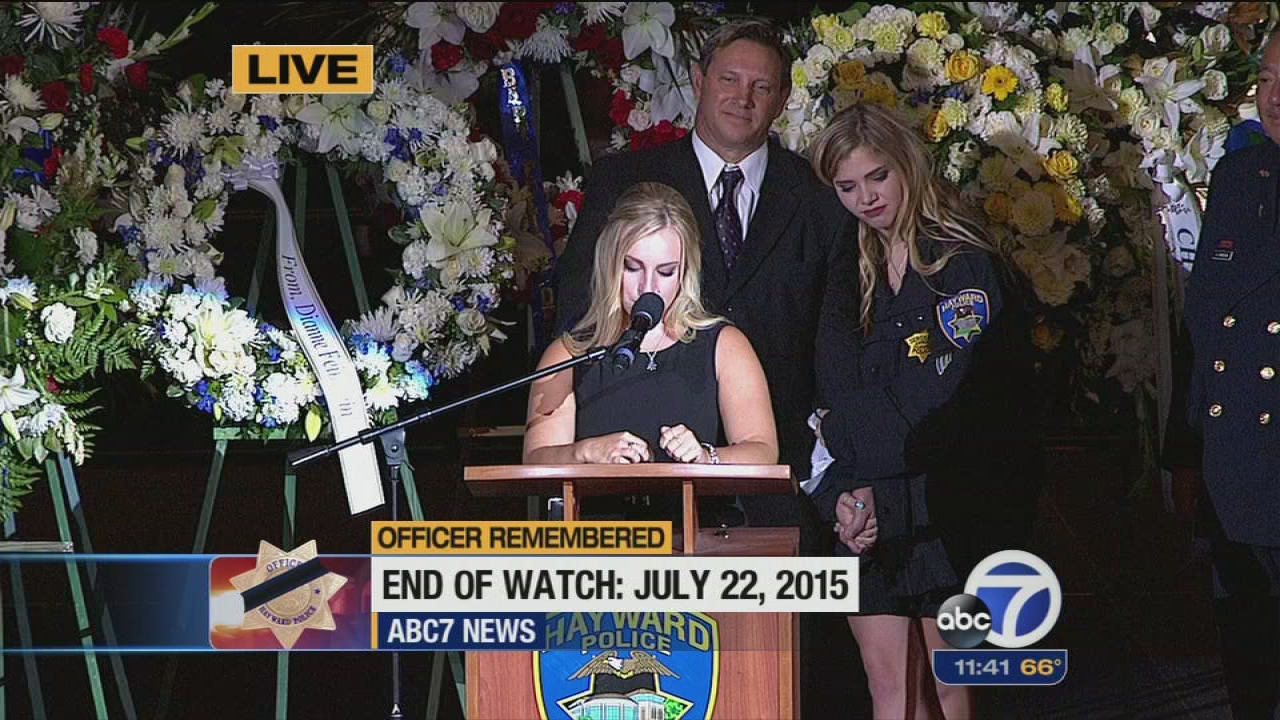 Lunger was shot and killed during a traffic stop last week. Hayward Police Chief Diane Urban said Lunger lived at full speed. "Here's to you Scott, it was one hell of a ride," Urban said.

It was a ride in which he steered the careers of many, noted congressman Eric Swalwell. "It's a devastating loss that he won't be the field training officer for generations of officers to come," Swalwell added. 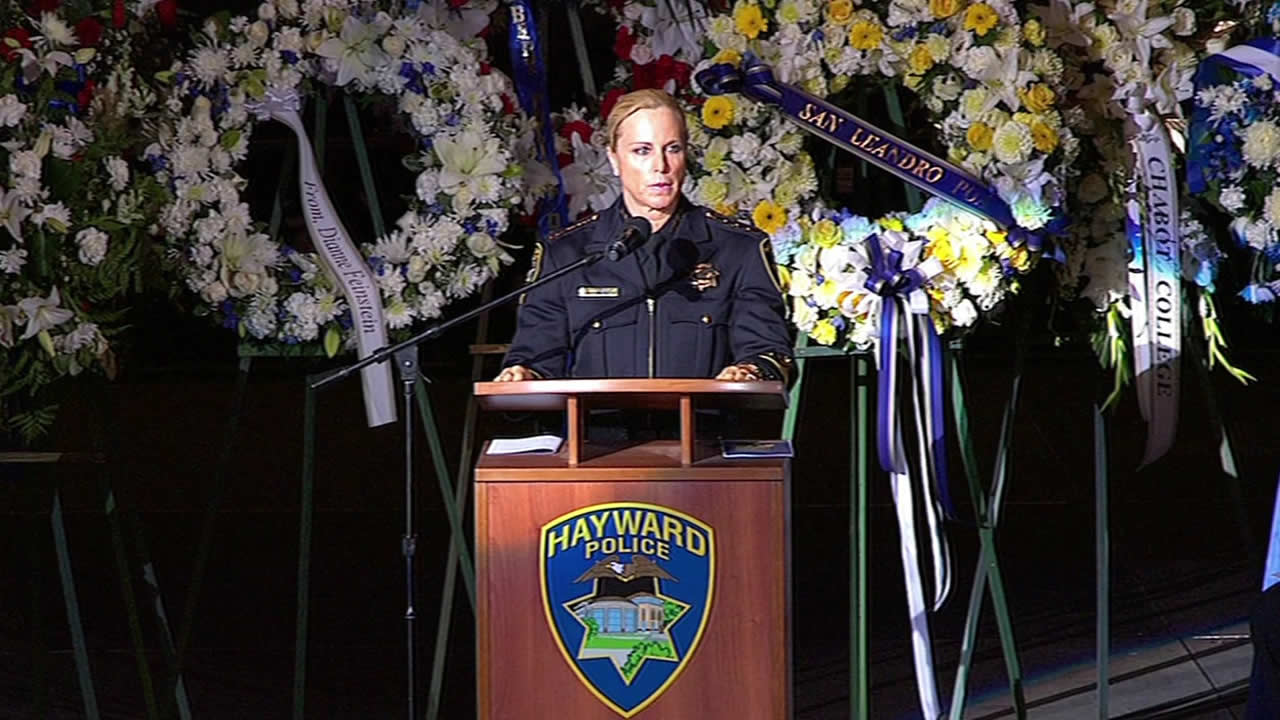 His partner Officer Justin Green promised to continue Lunger's legacy. "I will continue to honor him by passing on the knowledge that he has given me to other officers and being the mentor that he was to me," Green said. 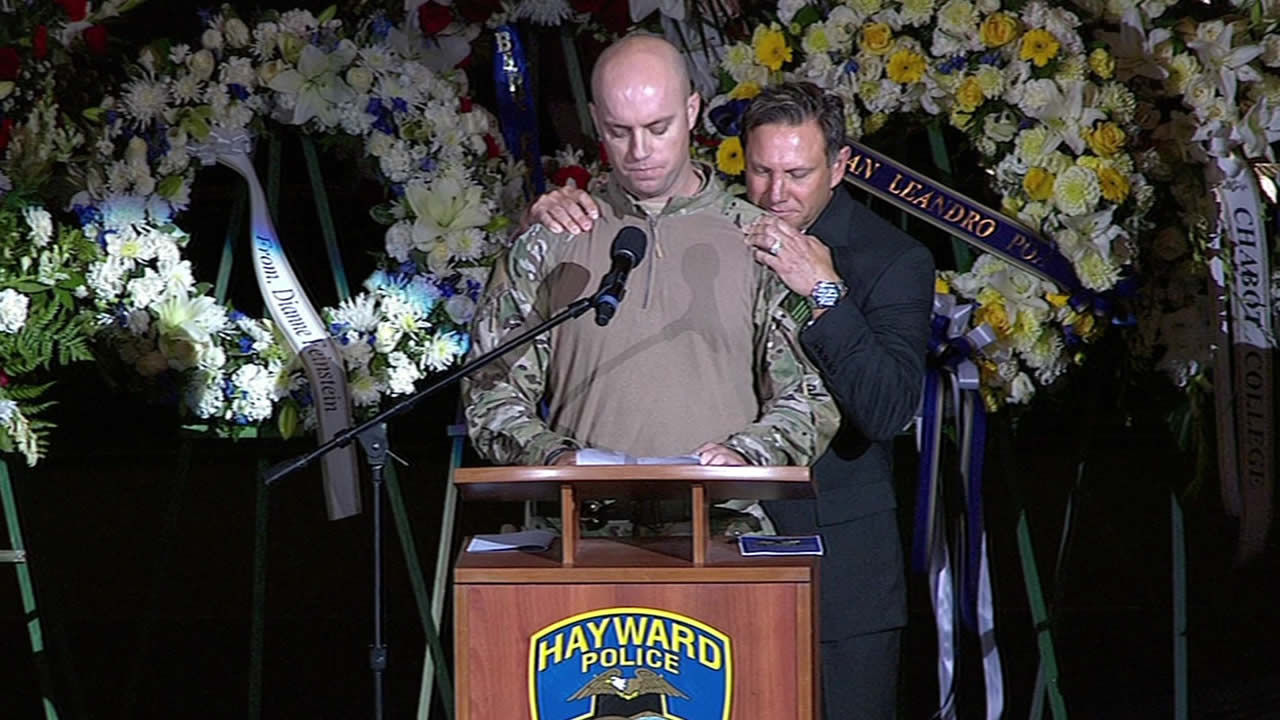 Lunger's teammates on the Tri-Valley A's say they still feel his presence.

"I know he was with us pushing our bats to be mighty, pushing our feet to be swift," said fellow teammate Tony Jackson.

It was a sentiment shared by the Freedom High School softball players he coached.

"Even if you had problems outside of softball he was always there to talk to," said Marissa Gasca, former Freedom High School softball player.

Lunger was a man who exemplified strength in all aspects of his 48-years of life.

"My dad wasn't afraid to die. We talked about it a lot and he always said dying is a part of life and the only thing we can do is to enjoy every day we get," Saralyn Lunger said. 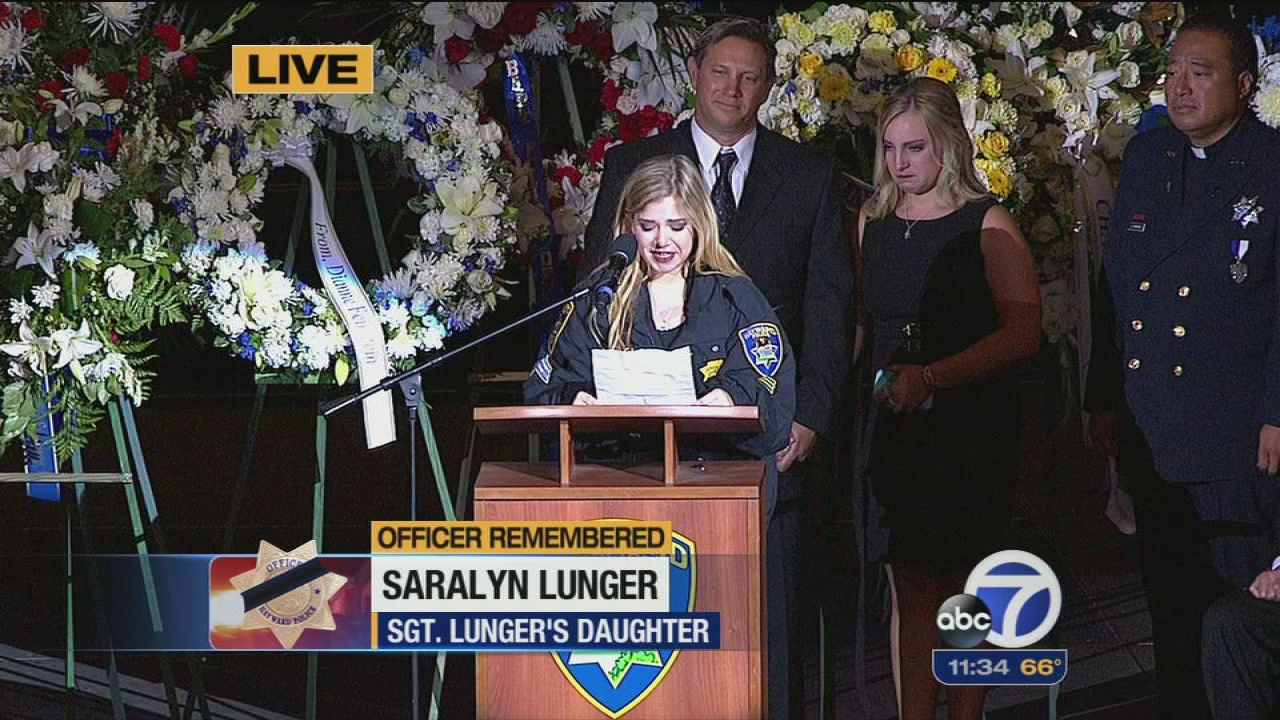 Yesterday, family, friends and members of the community showed up during the public viewing. This morning, there are officers from other police departments standing guard until Sgt. Lunger's casket leaves the Chapel of the Chimes in Hayward to making its way to Oracle Arena.

The loss of Sgt. Lunger's life has touched so many including those who didn't know him but wanted to thank him for his service by leaving cards and flowers outside the Hayward police station

"Feelings, compassion, a community in mourning, really loving feelings this man projected. Good, good person, very humble, very sound values. Someone, someone we really need to be around for us. And under the surface, you don't know these people from day to day because they're not so visible," said Katherine Carroll, Hayward resident.

Sgt. Lunger was considered a role model to many, he has been called an ideal police officer and a dedicated father. He had two college aged daughters Ashton and Saralyn.

The community was out near the chapel to show their continued support as Lunger's body was escorted by a police motorcade to Oracle.

Urban hoped for an impressive turnout at the procession and memorial for Sergeant Lunger. She says he loved the pride, pomp and circumstance of big ceremonies...and that's just what the department plans to give him.

"Scott was a guy who appreciated traditions and honor. The goal of this organization is to treat him with dignity and respect. To have O.co filled with people who appreciated him would be beautiful to the organization and as well as Lunger family. Who are grieving terribly," said Urban.

Urban said all of the departments 200 sworn officers and 150 support staff would attend. Following the memorial, nine helicopters from surrounding agencies flew over Oracle Arena in formation. Chief Urban requested that those who couldn't make it to pay their respects by lining the streets as the convoy makes its way from Hayward to Oracle Arena. 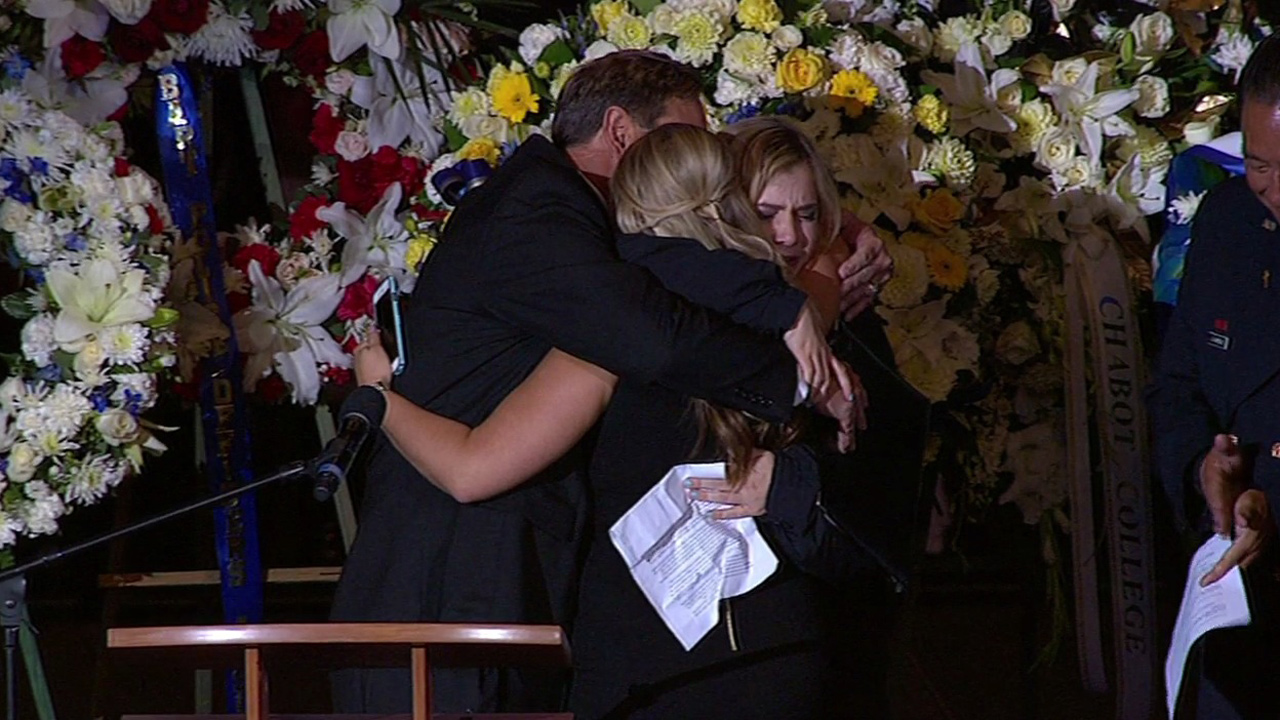