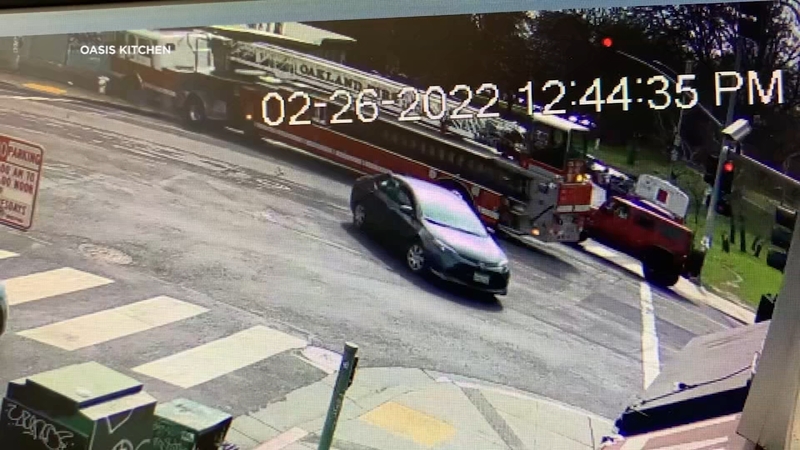 OAKLAND, Calif. (KGO) -- An Oakland hook-and-ladder fire truck crashed into a building Saturday near Lake Merritt, and it was all caught on camera.

The video shows one fire engine speed through the intersection. Then, a car tries to make a left turn, right in front of the ladder truck following closely behind.

That ladder truck swerves to avoid the car, and goes straight into the storefront of a ground floor business at Grand Ave. and Perkins St. Fire officials say the truck is considered totaled.

Building Engineers, OFD Command Staff and Crews continue to work diligently to shore up the structure at 353 Grand Ave as the tow company begins initial steps to extricate the apparatus from the building. Pedestrians and vehicles should Avoid Grand Ave b/w Harrison & Staten Ave. pic.twitter.com/W2RkUkfLtY

Three of the five firefighters onboard were taken to Highland Hospital, and are expected to be okay.

The truck was headed to a fire- its lights and sirens were on- when the crash happened.

A city building inspector is now on scene, evaluating the damage.

"There's a total of 21 units in this building. And we have a complete gas and electric shutoff to this building. so all people are displaced at this time and Red Cross is working with all of them," Batt. chief Chris Landay said.

No one else was hurt in the wreck.

East Bay MUD and PG&E are on scene because the collision also damaged utility lines.