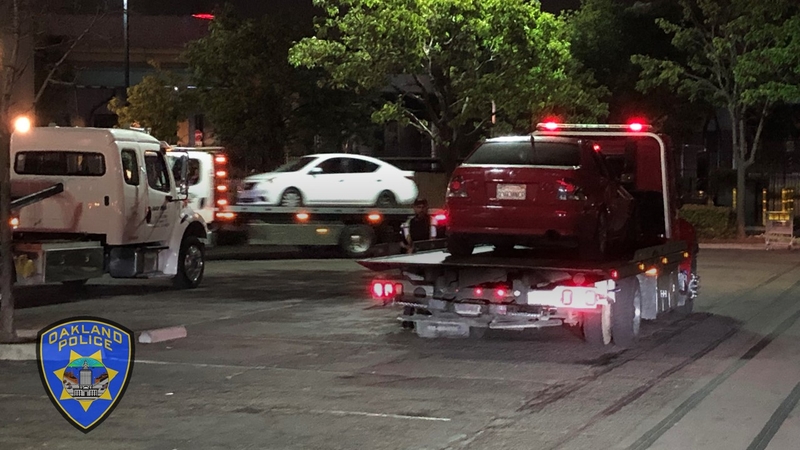 OAKLAND, Calif. -- Sixty vehicles were towed away from an illegal sideshow in Oakland late Thursday evening and early Friday morning, the latest example from the police department that participation in such activity will not be tolerated in the Bay Area's third-largest city.

When it was all over, police officers made two arrests, cited 17 others and recovered a firearm.

Chaos and mayhem in San Francisco after an early morning sideshow took over downtown streets creating a scary wake up call for hundreds of neighbors.

Oakland police spokesperson Paul Chambers said Friday afternoon that its police helicopter spotted hundreds of vehicles driving along Interstate 580 Thursday evening. Chambers added once the caravan arrived in Oakland, there were at least 350 vehicles ready to participate in an illegal sideshow.

Chambers said participants unsuccessfully attempted to take over intersections along Telegraph Avenue before moving on to the intersection of 20th Street and Broadway. That is where some of the crowd threw fireworks and bottles at Oakland police officers.

As the weekend approaches, Chambers said officers will be dedicated to illegal sideshow activity, adding they will be accompanied by regional law enforcement partners to deter and take enforcement actions.

Anyone with information about illegal sideshows is asked to call the Oakland Police Department at (510) 777-3333, or send a tip to sideshowtips@oaklandca.gov.