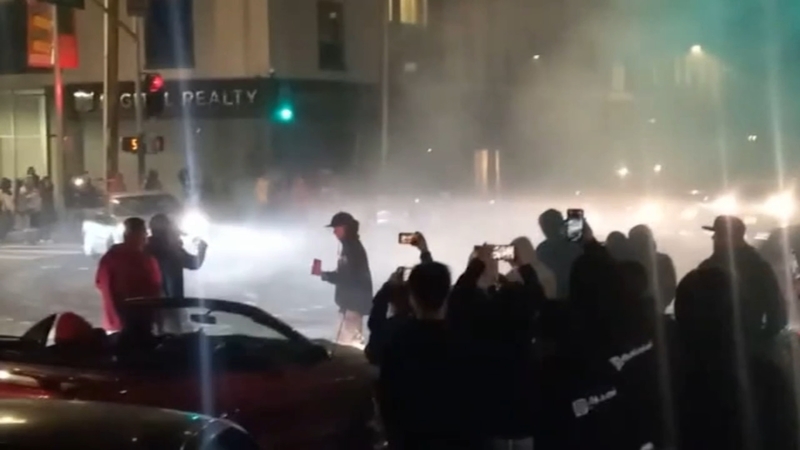 SAN FRANCISCO (KGO) -- There was chaos and mayhem in San Francisco, after an early morning sideshow took over downtown streets, creating a scary real-time wake up call for hundreds of neighbors. Many say the dangerous activity must stop.

"It was insane, I was in my apartment trying to get some sleep," said Will Decker.

Decker and hundreds of his neighbors woke up a large sideshow early Sunday morning, burning rubber across the intersection of Main and Harrison near the Bay Bridge.

"My window was completely closed last night and you could smell the rubber, brutal smell. Fireworks were going off, loud tires, a nightmare for everyone," Decker said.

Witnesses say sideshow spectators were everywhere, many telltale skid marks were left behind.

"There are four to five hundred people, maybe more," said Noy, a neighbor.

Others grabbed video, showing traffic backed up for blocks and blocks.

"The city needs to do something about it they need to enforce it, start towing cars and get the police here on time, it's not happening," Habash said.

Witnesses say police arrived about 15 minutes after the illegal sideshow began. But in many cases, police are outnumbered.

Another sideshow was reported about the same time across town, at Geneva and Alemany.

Mccray says the department is working on a coordinated response to sideshows.

We're doing the best we can we need more help obviously, more bodies, without a doubt, you feel like you're rolling the dice hoping for the best," said McCray.

Witnesses say many drivers which participated in the sideshow took off before police arrived. ABC7 News reached out to SFPD about the incident but have not heard back.