This comes as Oakland Unified faces a budget shortfall of $50 million next year.
KGO
By Lyanne Melendez 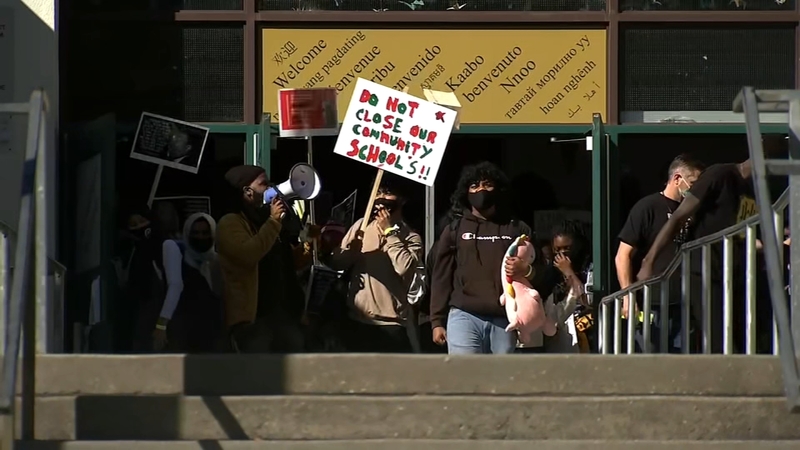 OAKLAND, Calif. (KGO) -- In Oakland, the school board deemed it necessary to close some schools in order to keep the district solvent. This comes as Oakland Unified faces a shortfall of $50 million next year.

Parents, students and teachers are so outraged over these closures that at least two people began a hunger strike in protest.

At noon, students walked out of Westlake Middle School in Oakland. Their plea is to keep their school from merging with another.

Maurice Andre San-Chez is one of the organizers leading the fight to stop the consolidation of schools.

"I am doing this hunger strike because this is important and it needs to happen," said San-Chez, a teacher at Westlake.

From Westlake, they marched down Broadway to district headquarters.

There are six schools on the school board's list to close next academic year. A few more including Westlake will merge.

RELATED: Oakland Unified narrows down list of schools up for possible closures or mergers

Another group of schools are slated for closure by 2024.

"I'm telling my students to stand up for what is right, to stand up against racism and to fight for their community," added San-Chez.

At last night's board meeting the superintendent confirmed that the closures will hurt communities of color the most.

"This is not easy for me to present this information, especially knowing that African American students and families will be the most impacted," explained Superintendent Kyla Johnson-Trammell.

Parents and Oakland Unified officials are outraged after a preliminary list of school closures was released without the district's consent.

The district says despite one-time monies from the state, they face a $50 million budget deficit next year.

Declining enrollment has been and continues to be a factor. Most board members agree it has become impossible to maintain all the schools in the district.

"One of the strategies was to look at schools, especially our smaller schools, and say are those very efficient and it turns out there is a substantial subsidy on those small schools," explained Board President Gary Yee.

Moses Omolade is a school administrator at Westlake who has joined the hunger strike. He's been drinking water mixed with salt.