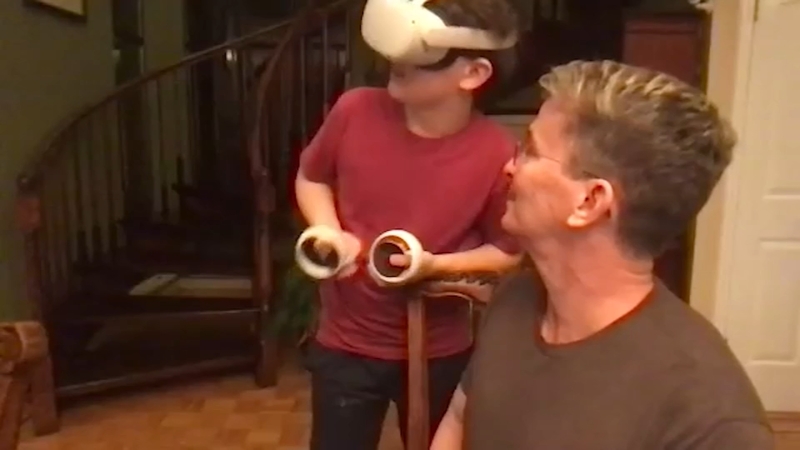 ALAMO, Calif. (KGO) -- Social media giant Facebook, now called Meta Platforms, has faced some big scandals: critics saying it has harmed teenagers, allowed foreign interference, misused our data and given voice to violent radicals. All in a drive for profits.

And so, one small voice of discontent -- a fed-up father in the East Bay -- seemed lost in the noise.

The dad is taking the big tech company to small claims court in a dispute that began with a faulty virtual reality headset.

Surprisingly, Facebook didn't just pay him off. It rolled out big guns to fight that small claim.

It began a year ago when the dad bought his son a virtual reality, 3D headset from Oculus VR -- a company owned by Meta/Facebook. He says it stopped working, and Oculus wouldn't correct it, just kept ignoring him. Now he's saying the big companies need to start paying attention to their billions of customers.

Bobby Redman got an Oculus VR headset for Christmas -- a year ago.

He says it hasn't worked right since June. "All I can really see is 'left controller not connected,'" he said.

Missing video recordings during the robbery led one San Jose man to investigate the possible causes -- including Wi-Fi jammers.

Bobby's father Mark Redman kept emailing Oculus support, asking for a replacement under his one-year warranty. "It completely stopped, it wouldn't boot up and it took months to get hold of them," Redman said.

Oculus replied it would need to first "validate his warranty."

Then it said it needed to "authenticate his account."

Finally, Oculus said it didn't have any replacements.

"They told us they were out of stock... and they kept saying that they were still out of stock. After three months went by, I said, 'I want my money back,'" Redman said.

He says Oculus refused to refund his money or extend the warranty even though the unit hadn't worked for months.

"They denied me, they said, 'No we're not gonna do that, we'll give you some extra credits...'" Redman recalled.

Redman filed a complaint with the Better Business Bureau.

"Then they just stopped responding at all. The Better Business Bureau sent two letters and they didn't respond," Redman said.

Turns out hundreds of Oculus customers had filed similar complaints, earning Oculus an "F" rating with the BBB.

And in spite of its global dominance, Meta / Facebook itself also has an "F" rating -- for ignoring thousands of complaints from customers.

"I've become kind of a slave to Facebook. I'm on it every single day... they know that we're trapped, we're addicted to their products, there's no other place to go," he said.

"They don't really even care. So it's, they're just, they're too big of a company. And they, you know, they need to be held accountable," Redman continued.

So Redman filed a small claims lawsuit against Oculus and Meta/Facebook.

He asked for his money back, plus $500 for all his troubles.

"This is an inch thick, all the documents that I went through," he said, showing his papers.

Ironically he could not reach the companies to serve the court papers.

"They said they haven't been here in three years," Redman said he was told.

The address registered with the Secretary of State for serving court papers to Oculus is no longer valid. The small claims court served the companies instead.

And finally Redman got their attention.

The law firm sent him a letter saying Oculus was sending him new controllers, and would extend the warranty after all, plus throw in a $50 gift card. "I was a little shocked they would have an attorney of that caliber offer a $50 gift card after all we've been through..." Redman said.

And would he drop the lawsuit?

"It was a slap in the face... they're completely not taking accountability for what they've done wrong," said Redman.

7 On Your Side has reached out to Meta/Facebook over the past four weeks. A spokesperson said the company would decline comment.

The attorneys also did not respond to our inquiries.

"This is not about the money. It's the principle of the fact. It's just ridiculous how these big companies treat the consumer," Redman said.

7 On Your Side has just learned Meta has now offered Redman a full refund for the Oculus system after all, plus about $300 to cover his court costs -- a little better than a $50 gift card.

Redman says he still wants a pledge the companies will register a correct address, and honor warranties. A judge granted the companies more time to try to settle; a trial is scheduled for April.