No evidence of cruelty or neglect on pit bull that attacked Alameda Co. fire chief

He was responding to a house fire in unincorporated San Leandro when the pit bull named Kado turned on him.

Alameda County Sheriff's investigators now say there's no evidence of animal cruelty or neglect but the dog could still be put down.

Kado remains under quarantine while investigators determine what to do with the dog.

Sheriff's officials have shifted the case to a vicious dog investigation after ruling out animal cruelty or neglect.

"That ultimately determines what course of action we take with the dog," said Sgt. Ray Kelly with the Alameda County Sheriff's office. "Whether we will return the dog to the owner or whether the dog will ultimately lead up to euthanasia."

Kado viciously attacked Alameda County Fire battalion chief John Whiting Saturday morning after he had responded to a house fire in the 16,000 block of Maubert Avenue.

There were 20 dogs inside at the time of the fire - two of them lost in the blaze.

Whiting was about to interview a 15-year-old fire victim who had been rescued when the leashed pit bull bit him in the face, causing severe injuries. Whiting's family and some colleagues have been at his bedside as he recovers at Stanford Hospital.

"It made me feel better actually hearing him speak, seeing that his pain level was down," said Ryan Nishimoto with Alameda County Fire, noting Whiting's progress after visiting him on Sunday. "He's really going to be missed because the footprint he puts on this department when he's here at work."

RELATED: Beagle dies after pit bull attack outside of PetSmart

The road to recovery will be a long one.

Now there's the question of what to do with the remaining 17 dogs - most of them puppies.

The fire victims were in violation of a county ordinance that allows residents to have only two dogs.

"Anytime you have a lot of dogs and you're not complying within the law, you open yourself up to extra scrutiny," said Kelly.

The residents could face a citation. But everyone agrees, the focus right now should be on Whiting's recovery.

Despite the unfortunate circumstances, the fire veteran is said to be in good spirits. 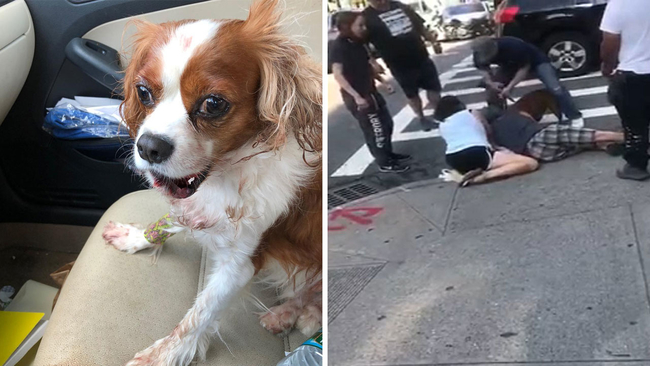