An Alameda County official tells ABC7 News there will now be what is called a "vicious dog hearing" to decide the fate of the dog.
KGO
By J.R. Stone 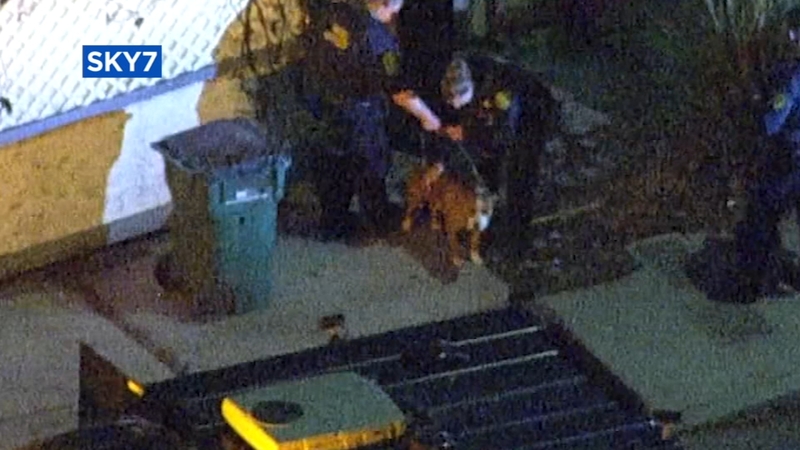 Authorities confirm that this pit bull has now killed at least two dogs in less than four years.

"He sniffed her forehead for one second, she's still wiggling her tail, and in a split second before I can even grab her, he turned his head, opened his mouth and grabbed her by the throat," says Yolanda Salazar.

RELATED: SF woman's 15-year-old maltipoo mauled to death by another dog during walk, owner runs off

Salazar is describing what happened when the dog, seen in our SKY7 video recorded on Wednesday night, killed her dog "Little Bit" as they were walking back from the Dollar Store on Monday.

She broke down crying as we spoke with her.

"At that point he started to shake her and she started to scream and scream and scream for about five or 10 seconds. He was shaking her and at that point I started hitting him and kicking him. I had a handful of groceries and I finally dropped the groceries and I tried to kick him, and I wasn't even phasing him... She stopped screaming, I heard her little neck snap," says Salazar.

Anthony Johnson has the latest on an 81-year old woman who was injured when she intervened during an encounter between two black bears and her two dogs.

Painful memories of her 14-year-old Chihuahua-Jack Russell Mix dying in front of her eyes from an off-leash pit bull roaming the neighborhood.

In fact, officials confirm the dog also killed Yolanda's other dog back in 2018. Wednesday night, more than 48 hours later, the dog in question was taken away by Alameda County animal control.

While Yolanda and her daughter Necole were glad to hear that news, they are upset that this animal hadn't been taken off the streets sooner.

Yolanda, who was dragged five feet by the pit bull and was in the ER until late Tuesday night, doesn't want the dog back in the neighborhood. She says it wouldn't be safe, as she described the moment a worker found "Little Bit" underneath the pit bull.

"He said she was hovered over her like she was a toy, munching on her," said Salazar.

An Alameda County Official told ABC7 News there will now be what is called a "vicious dog hearing" to decide the fate of the dog, but that official believes the dog should be euthanized.