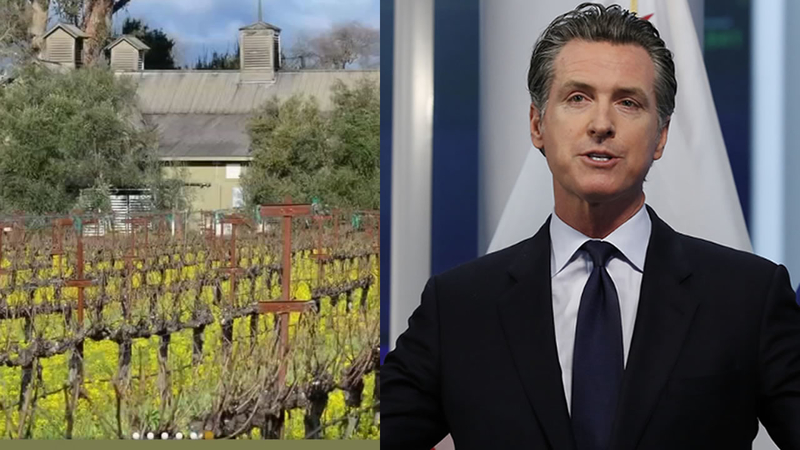 While data released by the Small Business Administration earlier this year showed the PlumpJack Group received up to $350,000 worth of PPP loans, newly-released data by the SBA indicated PlumpJack businesses - including wineries, bars, and restaurants - received more than eight times that amount at nearly $3 million altogether.

In 2018, Gov. Newsom placed his ownership interests in the PlumpJack Group into a blind trust. This means he would have no knowledge or role in the company's business decisions made during his time in office.

Digging into the data

The ABC7 I-Team discovered discrepancies between that company's SBA data and publicly available records that appear to raise questions about how much money some companies received under the program.

One of the companies on the list is Villa Encinal Partners Limited Partnership. State records indicate the name is traced back to the PlumpJack winery in Napa. San Francisco billionaire Gordon Getty is an investor.

In order for the loan to be forgiven, the SBA requires at least 60 percent be used to cover their wages. Based on SBA's data, Villa Encinal Partners LP retained 14 employees. Hypothetically, if divided equally, each of them would've received around $40,000 to cover their payroll over a period of three months - that would amount to an annual salary of around $160,000 per employee.

"It's unexpected for a 14 employee organization to get nearly $1 million," said Sean Moulton, a senior policy analyst with Project on Government Oversight (POGO). He specializes in tracking PPP funds. "The purpose behind this program was to save entry-level jobs, people going in and working on that paycheck. That was what we put this out there for, to stop unemployment."

The average small business loan for California companies retaining 14 employees was roughly $128,000. Yet, the PlumpJack entity Villa Encinal Partners LP - that according to SBA data also retained 14 employees - received more than seven times that amount at $918,720.

ABC7's analysis found the only other California winery that received close to the same loan amount as Villa Encinal Partners LP is Oak Knoll Farming Corp, which retained 79 employees - more than five times as many as Villa.

The average number of employees retained for every California winery that received more than $900,000 worth of PPP funding is 148.

The Millbrae Pancake House received a $431,400 loan and retained 53 employees. As a comparison, that's less than half of what Villa received and Burke retained nearly four times as many employees.

"That seems unfair because there are small family businesses like ours that need that money," owner of the restaurant Erin Burke said.

After 60 years of operating, Burke was forced to shut down her family-owned business on Nov. 29.

"We're just trying to do the best that we can and survive," she said. "That money wasn't enough."

The San Francisco Chamber of Commerce reports a majority of small businesses that struggled to get PPP loans say the loan size wasn't enough or the owner misunderstood the application.

"I think it's heartbreaking," said Jay Cheng, the organization's public policy director. "We see huge discrepancies between small business and the kind of loans they got and their ability to get loans and larger companies that are well-resourced and well-staffed and had strong relationships with their banks."

Another company affiliated with the PlumpJack Group is Balboa Cafe Partners LP that received a $506,799 loan on April 29, 2020. A commercial data firm estimated in June 2020 that Balboa Café Partners employed seven individuals, but SBA data associated with their loan application states they retained 55 employees.

ABC7 reached out to PlumpJack Management Group for clarification on how the nearly $3 million of PPP funding was spent.

We received the following statement:

"Like many other companies facing extreme financial duress during the pandemic, we used loan monies to protect our workers and keep them employed. Our staff members and their loved ones have depended on these programs for their livelihoods. Gavin Newsom is not affiliated with the operation of the companies in any way. Any suggestion otherwise is unequivocally false," said Jeff Nead, spokesperson for the PlumpJack Management Group.

According to the governor's 2019 Statement of Economic Interest, Newsom does have an ownership interest in eight companies affiliated with PlumpJack that received PPP funding.

CalMatters revealed the governor's 2018 tax returns show he and his wife made $1.2 million from wages and investments - a majority of which stems from his ventures in wine and hospitality.

ABC7 reached out to PlumpJack a second time requesting payroll records to see how each of the 14 employees of Villa Encinal Partners was paid.

We received the following statement:

"Plumpjack Management Group is operating within the federal guidelines created for COVID-19 SBA loan recipients. These funds have been critical in keeping our staff employed and continuing our operations. Any implication that we have done anything outside of the guidelines (or that we have filed for forgiveness on the loan) is irresponsible," said Jeff Nead, spokesperson for the PlumpJack Management Group.

The PlumpJack Group will have two to five years to apply for loan forgiveness if they choose to do so. This means the company may not have to pay back these loans.

But for any company that does ask for forgiveness, "they have to certify when they apply that they retained their employees," said Miryam Barajas, SBA Region 9 Communications Director. "That's going to include payroll records, documentation filings, there's a lot of proof that these businesses have to show proving they paid their employees."

If companies don't seek forgiveness of the loan, they have to pay it back - but these companies still benefit.

"They were able to benefit from this extremely low interest rate the government was providing," said Danielle Brian, the Executive Director of Project on Government Oversight. "These are one percent loans...it's essentially free money for them."

ABC7 reached out to Gov. Newsom for further comment on this story and have yet to hear back.

In total, nearly $16.8 billion in PPP funding went to more than 130,000 companies across the Bay Area. The average number of employees companies retained is 10.


App users: For a better experience, click here to view the graph in a new window