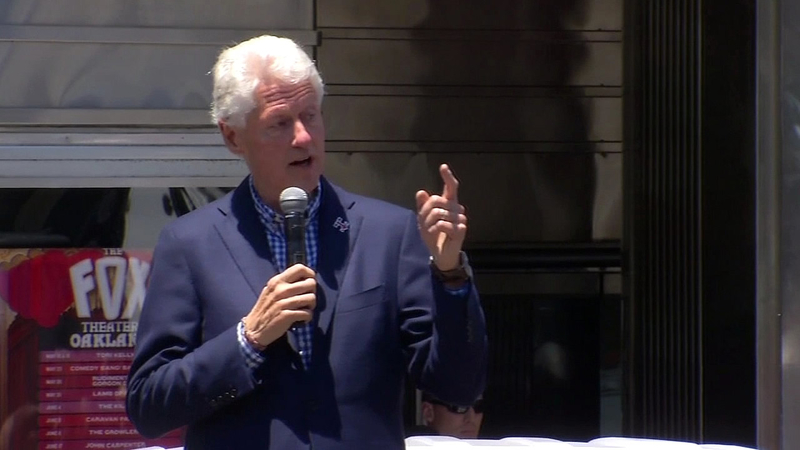 Her husband, former President Bill Clinton, is front and center in the Bay Area with many campaign stops, including in Oakland. "Tomorrow's a big day for America, and it is the beginning of the general election and our determination to make sure we keep going forward instead of going back and we do it together," he said.

The flurry of activity from Bill and Hillary comes just a day before the California primary, where polls show Hillary neck and neck with Senator Bernie Sanders.

Some think the competition from Sanders is good for the Democratic party. "He has done a lot for the party as he feels he should," Laura Monte said.

In Oakland, Bill received the full support from the city's top leadership, including Oakland Mayor Libby Schaaf, who took a swipe at presumptive Republican nominee Donald Trump. "Can you imagine what it would be like to have somebody sitting in the White House who is not only disconnected from real people, from real cities, but let's just be honest who is disconnected from reality," she said.

"If you want bridges, not walls, if you want, unity not division, and if you want a tomorrow economy, not a yesterday economy that won't come again anyway, Hillary's your candidate," Bill said.

Several hundred people gathered at an art center in Richmond to hear from Bill at a rally. Then later, Bill held another rally in San Francisco's Bayview District.

Even this close to the election, his speech could still make a difference. Most here are Hillary supporters, but ABC7 News met a couple of people who say they're still undecided.

Bill also spoke at a rally in Antioch earlier on Monday, while Hillary spent the day campaigning in Southern California.

.@billclinton keeping it simple, talking to about 500 people from back of a pickup truck in @Oakland pic.twitter.com/Oe59MuPXvD

These girls from the #OaklandSchoolfortheArts Awesome! Opening act for @billclinton pic.twitter.com/ktdtO4A6VT