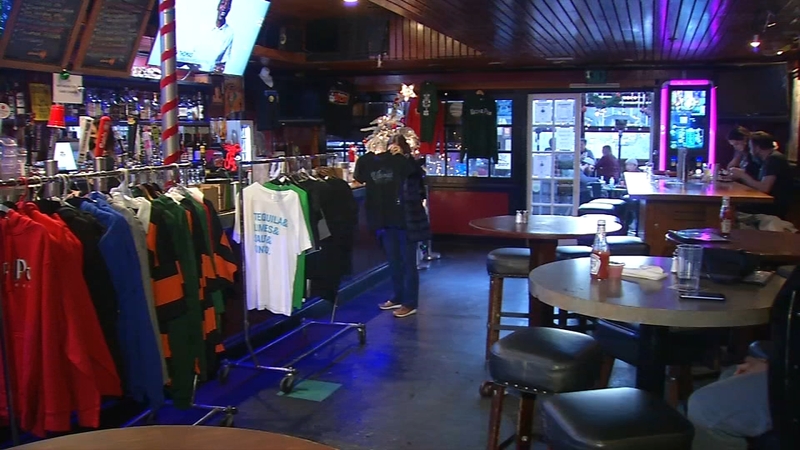 SAN FRANCISCO (KGO) -- With less than 24 hours to go before the big game, both fans and businesses are getting ready to cheer on the 49ers Sunday afternoon.

At Kezar Pub in San Francisco, owner Cyril Hackett tells me he's expecting his bar to be standing room only for most of the day.

Across town, it was a similar story at Harry's Bar, where they ran out of reservations last Sunday immediately after the latest 49ers' win.

"What I did is for tomorrow's game I rented some additional tables and chairs because I want to expand the outside seating area," said general manager, Charles Johnson.

With sports bars around the Bay Area expected to be packed with the Faithful, COVID safety was also on the minds of many establishments.

"We still follow some of the older protocols where we sanitize between each seating, we sanitize the menus after every use," Johnson said.

At Saturday's official 49ers tailgate party, well over a thousand 49ers fans showed up in anticipation of the Sunday kickoff.

But the big weekend is about a lot more than just sports. It's also a chance for local businesses to make up some of the revenue lost during the pandemic.

"Business has been down in general and really hasn't gotten back to where it was before. The 49ers definitely help. Big events help," Hackett said.

But despite the anticipation and nerves ahead of the big game, everyone we talked to says they're confident the Niners will bring home a win.

"Yes, of course! We're going to be shouting loud enough that we won't be able to hear the calls, and we'll root on the 49ers for a win and get them back to the Super Bowl," Hackett said.