24% of CA companies will require employees back to office by spring, survey finds 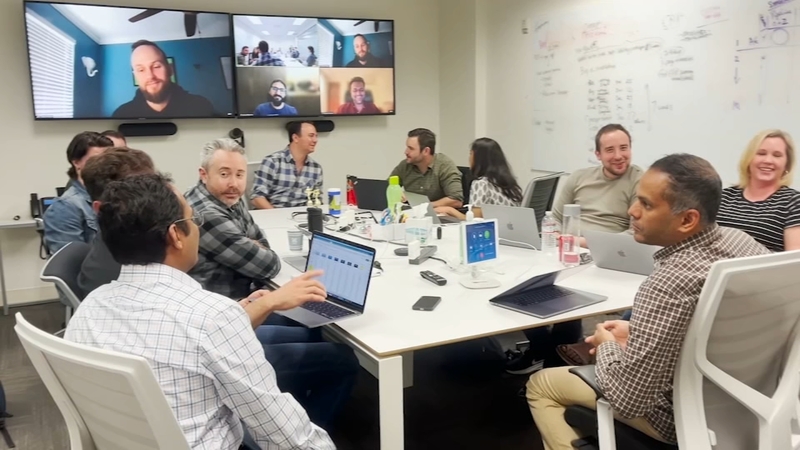 Survey: 24% of CA companies will require spring return to office

SAN FRANCISCO (KGO) -- Companies are finally calling employees back to the office, but for most people, the experience will be different.

ABC7 has partnered with Sequoia, a people-investment consulting and platform company, which surveyed more than 450 companies across the U.S. to see what exactly has changed.

It's getting busier in San Francisco's financial district - not five days in the office - but companies are bouncing back in new ways. The question is what exactly will that look like?

For people getting back to the office, the return comes with a renewed sense of excitement for in-person collaboration.

"It was just this relief of a back to normal but that I could see someone," said Mary Stern, the vice president of People Operations at Simpplr. "And not see... just a mask!"

Simpplr is a software company that helps businesses streamline communication within their workforce. The company is planning a gradual return to the office this spring.

"There is such a high energy and a giddiness...oh my god. I get to go into the office. I get to see people!" she said.

WATCH: Bay Area futurist's vision for next 10 years post-pandemic does not include a 'return to normal'
EMBED More News Videos

Some futurists believe life will not return to normal after the coronavirus pandemic, especially with changes that already are posing new challenges.

Back to the office


"A lot of employees don't want to come into the office unless there's a good reason to and the reasons are collaboration, working on projects, the culture, and being able to interact with colleagues," said Landon Hersch, the director of software solutions at Sequoia.

Hersch says most companies surveyed are embracing a hybrid-work model where employees are in the office two days a week. But the majority have the choice to come in or stay home.

"I think that's where we're seeing quite the shift to a more employee-centric environment," said Hersch.

An employee-centric culture even when it comes to salary.

Kyle Holm is the vice president of total rewards at Sequoia. He says companies are making a concerted effort not to lower compensation this year.

"I think what stood out to me the most is seeing companies that are not adjusting salary when employees move... that went up slightly," said Holm. "Over half the companies are saying you can keep your compensation wherever you go."


On the other hand, while some companies are allowing employees to keep their salaries, regardless of where they live, other people are finding the influx of new hires may not be the best for their paycheck. According to Holm, veteran employees are getting short-handed as companies try to compete for quality candidates who are being offered big bonuses.

"The employees that remain may not be seeing the same increases," said Holm. "We may start to see some challenges with pay equity as the turnover and the increases to new employees happen."

Meanwhile, most companies surveyed say their 'great return' will be incremental and not immediate. Some even keeping capacity restrictions in place, even though it likely won't be necessary.

"We're not seeing an influx of people coming back to the office where capacity is an issue," said Hersch.

How big will the 'Great Return' be?

More than half of the companies surveyed indicated up to 20% of their entire employee base are coming into the workplace. San Francisco-based people-management software company Lattice is one example.

"Do you anticipate there will be a full return at some point?" ABC7's Stephanie Sierra asked.

"Probably not," said the company's head of people operations, Maurice Bell. "I don't think we're going to ever see 80 to 90% capacity consistently, because we're hybrid and people like the flexibility. They want to come to the office for a particular reason."

A reason --- that's worth making the commute.

Sequoia's full back to work survey is available here.