Authorities said the suspects, two men and a woman, are all convicted felons. All are currently in custody.
KGO
By Amanda del Castillo 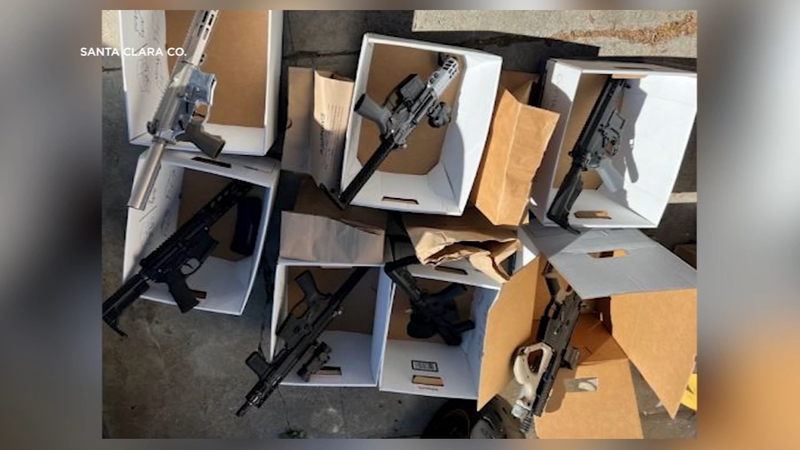 Three people are now in custody, accused of running the operation out of a home in San Jose's Willow Glen neighborhood.

Ask residents in the neighborhood, and many feel there's an undeniable sense of safety across this small pocket of San Jose.

"It's old world charm, parks and kids and lots of restaurants. It's got its own downtown," resident Gary Sassmann told ABC7 News.

However, located a little more than a mile outside of Downtown Willow Glen's core is what authorities are calling a full-scale ghost gun factory.

Along Roy Avenue and inside what's being described as an "unassuming $1.6-million home," a small arsenal was recently uncovered.

"I'm shocked! I'm shocked," Sassmann added. "Usually Willow Glen is so safe, you don't hear of anything like that around here."

#TONIGHT A ‘full-scale ghost gun factory’ was recently discovered inside a #SanJose home.

Three people were arrested and a small arsenal was seized.

Authorities said the suspects, two men and a woman, are all convicted felons. All are currently in custody.

Joseph Cahoon, 31, of Morgan Hill, Jack Mahon, 38, and Amanda Bazzani, 32, both of San Jose, are charged with multiple felony counts of illegal gun possession and were scheduled to be arraigned on Tuesday. Instead, their court appearances were postponed to Wednesday.

The DA's office said a search of the brick bungalow also uncovered 3D printers and other tools and machinery used to manufacture ghost guns.

These are firearms, popular for the criminal element. They can't be traced and are often bought and sold on the black market, ordered online, and assembled at home.

"That is why ghost guns are so popular with people who are not supposed to possess firearms," Deputy District Attorney Michael Vidmar told reporters. "They are able to get them through means that bypass background checks, safe handling mechanisms."

The house is located in her district. Councilman Davis said state laws will take effect on July 1, which will tighten ghost gun restrictions.

"There's actually a new law coming online in July, so that any un-serialized weapons or firearm parts will be illegal to have possession of," she explained.

"The concern is, like the people who were arrested here, who have made firearms that are one, illegal- assault weapons, machine guns. And they're also making guns that are being distributed into our community," DDA Vidmar said. "Likely falling into the hands of people who are not supposed to possess firearms."

SEE ALSO: 63% of Californians say gun laws should be stricter

The DA's office said the suspects, all convicted felons, specialized in custom-order assault weapons, built for criminals, and sold on the illegal market.

They face prison time, if convicted.