San Jose residents calling for clean-up at homeless encampments: Here's what the city has planned

"The amount of trash that is there is appalling. It's not safe, it's not sanitary. It's not okay."
KGO
By Tara Campbell 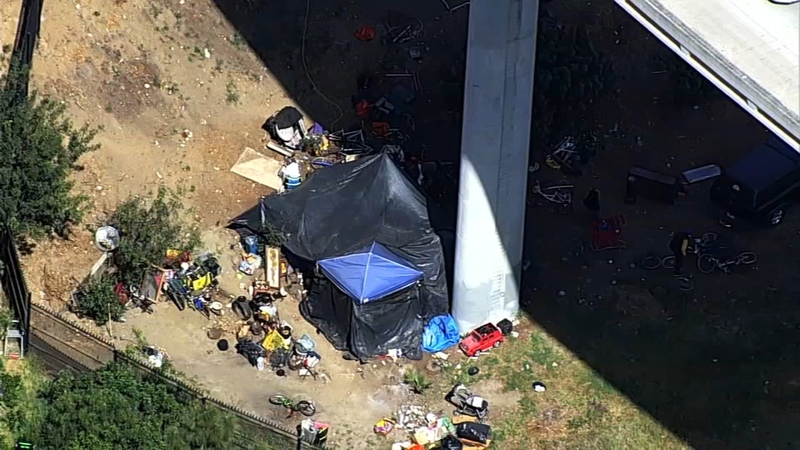 SAN JOSE, Calif. (KGO) -- From one homeless encampment to the next, it's a sight some are getting sick of in San Jose.

"The amount of trash that is there is appalling. It's not safe, it's not sanitary. It's not okay," said Jmyya Washington, who lives near a few encampments. "You cut the corner, it's all right there, you go down the street to the library, it's right there."

Every time she drives by an encampment, it worries her.

The San Francisco Fire Department reports one person died and three others were critically injured Wednesday near the city's Glen Park neighborhood.

"You better be lucky you don't hit somebody, or something's going to fall down and you'll get in an accident," said Washington, who is frustrated after numerous complaints have gone unanswered.

She wants local and state officials to do more to help keep the camps clean.

And the City of San Jose is planning to bolster those exact services.

"The City Council provided our department with quite a bit of American Rescue plan dollars so we could up our game," said Andrea Flores Shelton, Deputy Director, Parks, Recreation, Neighborhood Services.

And a key part of the plan is to start picking up garbage every week starting at the end of April.

"If garbage is everywhere, we are going to come in and do escalated cleanups," she said.

One of those cleanups happened just a few days ago at Watson Park.

A San Francisco nonprofit is making a call to help women experiencing homelessness move off the streets and into safe shelter.

"We removed the debris, we took down camps that were sometimes two-stories high and 200 square feet and said okay this is how you can stay"

And being able to stay is a relief for people like Jody Bell who calls a camp home.

"I ended up over here in the encampment and the people are wonderful. It's like family to me," said Bell.

VIDEO: The uphill battle to keep the Tenderloin clean for residents

She's been living at the corner of Branham Lane and Monterey Road for a year, waiting for her family to come pick her up.

When asked if she considered going to a shelter she said: "Home First took an interview with me, but I told them not yet because my family could be here any day."

Meanwhile, the city is calling for patience. "We ask for a level of acceptance and beyond tolerance of our unhoused community as we battle with a really epic crisis," said Flores Shelton.

RELATED: 'I covered their eyes and we ran away': Family recounts what it's like living in SF's Tenderloin
EMBED More News Videos

And that encampment where Bell lives, could be a small win within that bigger battle. The city is working to turn it into emergency housing.

"We have an application to the state for that location to become a Homekey Project, so eventually the upside is instead of 8 to 10 people living outside we can have dozens of dozens of people living inside," she said.

As for Jmyya she's all for it; whatever it takes to get her neighborhood cleaned up.

"That would be wonderful, but the abundance of trash that's there now needs to be gone. It really needs to go."