Green's lawyer says he was a hero who was treated like a criminal, and is now recovering in the hospital.
KGO
By Zach Fuentes and J.R. Stone 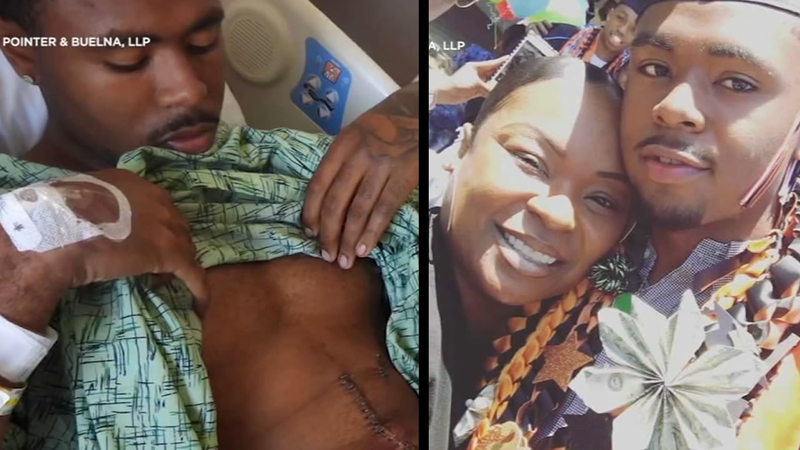 SAN JOSE, Calif. (KGO) -- The lawyer for a man shot by a San Jose police officer says his client was a hero who was treated like a criminal and is now recovering in the hospital.

Pointer says his client, 20-year-old Kaun Green, who is a football player for Contra Costa College, was eating at La Victoria Taqueria near San Jose State University with a friend early Sunday. He was approached and threatened by someone who was part of a group. Another person in that group had a gun and a brawl broke out.

RELATED: San Jose police investigating 2 shootings within 1 block of each other

Surveillance video released by police shows the melee. Police confirm that Green disarmed the man with the gun, but say officers responding didn't know that. When they arrived, Green had the gun in his hand.

In any shooting investigation, we invariably learn more tomorrow than we know today, so let’s refrain from jumping to conclusions until the investigation’s completion. In the meantime, we can all agree that this is a tragic conflation of circumstances: 1/3

The chief says officers had been searching for a homicide suspect in a case that had just happened a few hundred feet away. He says commands were clearly given to Green, but he did not drop the gun.

Pointer says witness video from outside the taqueria shows a different story.

"The officers were walking up the stairs. My client is backing out, you hear them yell something, and within less than a second there are gunshots," says Pointer.

Green is now recovering after being shot in the abs, an arm, and a leg. Pointer says at this point they plan to file a lawsuit and bring this case in front of a jury.

San Jose police say they found out that the man they shot was not the one who brought the gun.

The person who did bring the gun was arrested that night.

Mata explained more about what the officer who shot knew and didn't know leading to the shooting.

The Santa Clara County District Attorney's Office seized an arsenal of illegal weapons from what they're calling a "sophisticated ghost gun factory."

It will be the District Attorney's office who will determine whether the shooting was lawful and justified.

Mata says that the officer who shot at the man has four years of experience and has been placed on routine administrative leave.

The bodycam video that would include the officer asking the man he shot to drop the gun has to be released per state law.

San Jose police say it should be released within 45 days.